You are here: Home / Firm Dynamics / The Lesson of Jim Goetz: Great VCs Make Their Own Luck 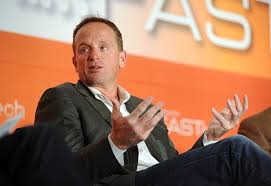