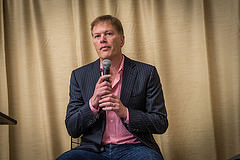 Morehead knows Bitcoin as well as anyone. After logging time at Deutsche Bank and Goldman Sachs, then joining Tiger Management, where he rose to the head of global macro trading, Morehead founded Pantera, a 12-year-old outfit that has more recently committed to investing exclusively in Bitcoin and other digital currencies. We wanted to know why — as did Shah — so Shah asked him. Parts of their discussion follow, edited for length.

SS: There was exuberance over Bitcoin, then not, and now it’s coming back. What’s going on?

DM: Every technology goes through a hype cycle, where there’s a kernel of truth or a kernel of genius, and once the media catches it, it [captures everyone’s imagination] for a while. Then there’s an awkward period. And Bitcoin went through that. [But] it was more extreme because it has one unique feature. It’s a technology protocol that has a real time price feed. And that’s really, really weird.

In 2011, no one really cared. By 2013, everyone had [that price feed] on their screens and the press was talking about it, and it led to extreme bubbles [including in Bitcoin mining]. At the end of 2013, the price of Bitcoin was 93 times higher than it was the year before. Bitcoin improves all the time, but it wasn’t 93 times better, so a bubble . . . had to deflate.

SS: Was it rational for Bitcoin’s price volatilty to affect venture investment in the technology?

One data point about Bitcoin: All the companies in the Bitcoin ecosystem are worth just over $3 billion today. All the Bitcoin that exist are about worth that right now. So you have a ratio of about 1:1. Meanwhile, in talking about the U.S. equity market or the developed company space, the market cap of all the companies in the U.S. is worth five times the value of money supply. So I think you’re going to see a persistent trend of value venture in Bitcoin increasing at a faster pace than the underlying currency or protocol.

SS: Numerous traditional VCs have made bets on seed- and early-stage Bitcoin companies, but it seems like these bets will take longer [than expected] to play out. Will they have to continue supporting these companies, or will other investors come down the stack?

DM: It’s certainly taking longer than some people expected a few years ago. But you’re seeing [an influx] of investors. Last month, Circle [Internet Financial] did a round with Goldman Sachs, which was the first major international bank to invest. So not only are you getting the traditional venture investors, but you’re getting strategic investors like big banks and big exchanges trying to get invested in the Bitcoin space.

SS: You understand Wall Street. How does it perceive Bitcoin, both as a currency and as a technology platform?

DM: I think most of Wall Street realizes that the systems that move money are incredibly antiquated and incredibly inefficient. Most of them were designed in the 1950s. The main thing for wiring money – SWIFT – is basically sending messages and it’s very primitive and can be disrupted by Bitcoin very easily, and most banks would like to see that happen.

SS: How would that affect big banks’ fees and the way they make money?

DM: I think too much was made in the early days of [Bitcoin’s ability] to disrupt banks. A lot of banks now have retail stores – selling services to people. So they can still retain their relationship with the customer and then swap out the back end.

Also, there are a small number of banks that do cross-border money movement; they’re called correspondent banks, and there’s really only a dozen or so that control an entire market. An extreme example is Africa, where, if you want to move money into or out of the entire continent, there are only two banks that will do it and other banks need to use those two banks and it’s very expensive. So banks want a cheaper way to get money in and out of places like that.

SS: What is happening in Bitcoin in the rest of the world outside the West, especially where rule of law is weak?

DM: In mobile money, Kenya is actually the world leader. Southern Africa has weak institutions and currencies that deflate at a rapid rate; Zimbabwe is the world record holder with a 100 trillion dollar note now. So their citizens need a better solution to transact.

They also are unbanked [along with billions] of other people on earth that don’t have access to a bank but do have a cellphone, and going straight to some mobile money solution — bitcoin is a great solution for that. Already, 75 percent of adults in Kenya use a mobile system called M-Pesa. In fact, 45 percent of the entire GDP of the country is processed in M-Pesa. To me, that’s the future of bitcoin.

(If you’d like to hear more from this discussion, you can listen to it in its entirety here.)