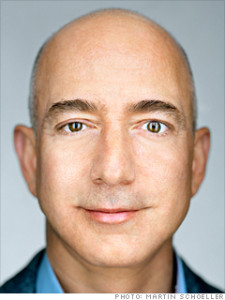 Yesterday, Bloomberg published an excerpt from a new book on Jeff Bezos that portrays the billionaire CEO of Amazon as a brilliant but ruthless dictator, one who treats workers “like expendable resources.”

Michael Maccoby, a psychoanalyst who writes about business executives and teaches leadership at Oxford’s Saïd Business School, doesn’t view Bezos’s tendencies to mistreat employees as his biggest liability, though. Rather, it’s his lack of a strong number two.

Amazon’s success has certainly been stunning. As the book points out, 20-year-old Amazon now has roughly $75 billion in annual revenue, a $140 billion market cap, and nearly 100,000 full-time and part-time employees, up 40 percent from last year. In late summer, Bezos personally acquired the Washington Post newspaper and some related properties for $250 million.

Maccoby, who has worked closely with 40 CEOs over the years but has studied many more, thinks Bezos resembles “narcissistic visionaries” like Steve Jobs, Larry Ellison, and Bill Gates — with one major exception. All had a right-hand man; Bezos seemingly does not. And “that kind of personality needs to have strong partners who balance them and who complement their skills,” insists Maccoby.

Maccoby points to Microsoft co-founder Bill Gates, who, in the company’s earlier days, could dream about the future while sidekick Steve Ballmer obsessed about Microsoft’s day-to-day operations. Maccoby also cites Steve Jobs’ relationships, first with his Apple cofounder Steve Wozniak and much later with Apple executives Tim Cook and Jony Ive. And there is Oracle’s Larry Ellison, who has brought in a string of executives over the years, only to chew them up and spit them out. (Ellison’s current number two is co-president Mark Hurd.)

Asked whether Bezos might be an exception to the rule, Maccoby says, “So far, so good.” Still, he thinks Amazon’s decision to forego profits in favor of reinvestment are reminiscent of numerous endeavors throughout history, including those of, gulp, Napoleon.

It’s not necessarily an unfavorable comparison. Both enjoyed success at a young age, both rejected the established wisdom, and both took on seemingly invincible enemies and defeated them. If historians are to be believed, Napoleon – like Bezos – also had unrivaled intellectual powers and an astonishing capacity to integrate information from different disciplines.

Of course, as brilliant as Napoleon was, he eventually pushed his luck, ignoring repeated advice not to invade Russia. Says Maccoby: “Napoleon was very successful as long as he had Talleyrand as his foreign minister.” When he lost Talleyrand, he spun out of control.

“The danger with someone like Bezos is the same danger that Napoleon had,” Maccoby adds. Without enough pushback, “you can go too far.”