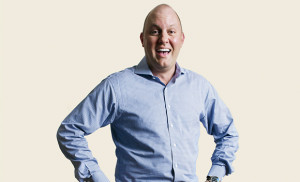 This week, I headed to Sand Hill Road to sit down with venture capitalist Marc Andreessen of Andreessen Horowitz, who is expert in keeping the media on its toes. His willingness to engage with the press – which has probably generated more public interest in venture capital than ever existed previously – is meant to crush the competition. As he told me years ago in a separate sit-down, “We like counter-programming. If there are three networks showing cop drama shows on Thursday at 9 pm, then what you want to do is put on a comedy.”

Next week, I’ll feature excerpts from our hour-long chat in which Andreessen touched on other ways Andreessen Horowitz is trying to out-innovate its venture peers, so be sure to tune in. In the meantime, here are two quick snippets from our conversation. In the first, Andreessen and I chat briefly about Twitter, a company that will make Andreessen money both personally and professionally. (Andreessen was among Twitter’s earliest individual investors, participating in the company’s $5 million Series A. As a firm, Andreessen Horowitz elbowed its way into Twitter in early 2011 by purchasing $80 million worth of secondary shares; Twitter was valued at roughly $3.7 billion at the time.)

Andreessen Horowitz prides itself on being fairly transparent. Yet you’ve tweeted twice – once, more than six years ago, to write “Twittering,” and about three years later to add, “I’m back – did anything happen while I was gone?” Why don’t you use it?

[Laughs.] I don’t know that I even have a good reason for it. I was a very active blogger at one point. I’m actually very active on Hacker News. I was very active on Quora for a while. So I just kind of bounce around, do different things.

At this point, at this firm, it’s more interesting for the other people to become more well-known, rather than me becoming more well-known. So it’s not a big priority for me to elevate my own brand. Plus, I’ve always thought it’s kind of funny.

Funny in what way?

[Laughs.] I don’t know. It’s just really funny. I was one of the first investors. And then I tweeted. And then I didn’t tweet. [And 900 days later], I tweeted again.

In this next snippet, Andreessen shares that his firm has more recently contemplated starting a hedge fund.

You’re managing $2.7 billion at this point, but it’s been a couple of years since you raised your last fund. Will we see a new fund in 2014, and might we see a $2 billion or $3 billion fund?

First of all, there are public companies we greatly admire…that we feel are undervalued or misunderstood. Also, in the venture fund, we’re trying to go long in the future, and so the other side of that would be to go short in the past, or to short the people who are not long in the future. So if we’re doing e-commerce in a category and think there’s a retailer that will suffer as a consequence of e-commerce becoming bigger, there’s another trade you could do on the hedge fund side if you’re private.

There are two really big issues with a firm like ours doing anything public. One, we think the insider trading risk is just off the charts. I saw that Mark Cuban just got off for the Mamma.com trade, and I’m very happy for him, but it’s a good illustration of how dangerous an environment it is for people who are kind of in the middle of things to take stock positions right now. There are just tons of prosecutions – the whole SEC thing – there’s just tons of scrutiny.

The other issue is we have this whole corporate briefing program, where you have 1,200 management teams from big companies coming through here every year and we run these big conferences. We just held our big CIO/CMO conference last week, with 150 top CIOs [and] CMOs, and it’s an amazing program and they’re really open with us about what their challenges are and what they’re working on and trying to do, and so, if we started to short their stocks…[laughs]…right? We’d basically blow that program up. So we decided we can’t do a hedge fund.