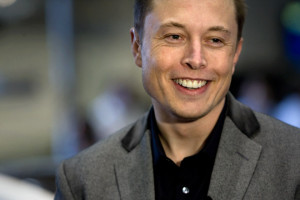 This week, the Web Summit conference in Ireland managed to attract some very big names, including Tesla and SpaceX CEO Elon Musk, who was interviewed yesterday as part of the event’s closing ceremonies.

The billionaire entrepreneur wasn’t alone on stage; venture capitalist Shervin Pishevar was among the guests. But Musk was clearly the main attraction. (As a leather-clad Musk strode to his seat, the James Bond theme resounded throughout the hall, and every smartphone in the audience shot up into the air to take pictures.) Here’s some of what Musk had to say during the panel, which was moderated by Storyful founder and CEO Mark Little:

On whether it’s a “great time to be alive as a creator”:

“I don’t think you could ask for a better time in history. I think people sometimes forget that. Realistically, when else would you want to be alive?”

On why, while running two billion-dollar companies, he would bother to fly to Ireland for Web Summit:

“I understand there’s going to be a great party tonight,” said Musk (convincingly).

Asked about his “lightbulb moment” as a teenager:

“It was more like when I was 21,” said Musk. “When I was a teenager, I didn’t really know what I was going to do. I liked playing video games and I liked writing software. So I thought maybe I’ll write [software professionally]; that seemed like a pretty fun thing. And then when I was in college, I started thinking about, ‘Well, what’s going to most affect the world?’ Actually, I thought there were five things that would most affect the world, three of which I thought would definitely be positive things to solve, two of which [were] a slight question mark. As it happens, I was able to get involved in all three of those things: the Internet, sustainable energy, and space.” [Alas, Little didn’t ask about the two other things.]

On why Musk didn’t simply start another e-commerce company after co-founding PayPal:

“The thing that motivated me there was I kept expecting that there would be a manned mission to Mars. That was the continuation of the dream of Apollo. We went to the moon. Then there was supposed to be a base on the moon; there were supposed to be space hotels. There were going to be missions to Mars. And year after year, that stuff didn’t happen. At first, I thought [that] maybe people [had] lost the will to do that, and I came up with the idea of this mission to Mars to kind of get people excited about that stuff again. But I came to the conclusion that I was actually wrong about that assumption, and there’s plenty of will. But it’s really about making sure there’s a way. If people think there’s a way to do it without bankrupting the economy, I think there’s plenty of will.”

On all the attention he receives versus SpaceX:

“We’ve got an awesome team at SpaceX. There’s way too much attention paid to me, and that’s not right. People want to identify with an individual, and so that’s naturally what occurs, but there’s a super-talented group at SpaceX who make it happen.”

Musk was also asked about his vision for the future of humanity and space exploration in particular:

“I think it would be really great to have a base on Mars, and ultimately to be making steady progress towards making it a self-sustaining civilization on Mars. I think that’s the most powerful thing we can do to ensure the long term survival of civilization. And it’s just a very exciting future, I think, if you imagine a future where we’re exploring the stars, and we’re a multi-planet species, and the scope and scale of society is that much greater.

[By the way, for European readers eager to get their hands on a Model S sedan, Musk said Tesla “should have the right-hand version in production in March” and he estimated that the car will be available to purchase by “late March [or] April.”]