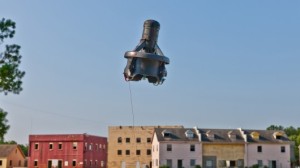 Amazon and UPS made big news this week, disclosing that they are experimenting with flying parcel carriers, respectively.

But the companies’ eventual use of drones isn’t what’s interesting to VCs like Bilal Zuberi, an investor with Lux Capital who has been studying the drone space for several years. The real story, as far as he’s concerned, is that two major commercial deployment opportunities have come into view, validating the market for unmanned aerial vehicles (UAVs) — and creating exit opportunities for them.

The development is of particular interest to Zuberi, whose firm owns a piece of CyPhy Works. CyPhy builds UAV hardware and software and could ultimately be involved in delivering your Amazon loot.

Jeff Bezos hasn’t invested in the company, but CyPhy was founded by iRobot cofounder Helen Greiner, and Zuberi tells me that Bezos is “close to the iRobot family.” (Bezos has invested in Rethink Robotics, a manufacturing robot company started by iRobots cofounder Rodney Brooks.)

Even if Amazon — which acquired the robotics company Kiva System last year, paying $775 million for the company and putting its robotics warehouse workers to use — doesn’t buy CyPhy, Zuberi suggests that Amazon’s embrace of delivery robots could encourage other potential acquirers from Walmart to FedEx to enter the market.

“People always ask me, ‘If you’re successful, who would buy you guys?’ Well, Amazon [has bought a robotics company]. Why would UPS or FedEx not buy one of these [UAV] companies?”

Of course, that’s all years down the road. UAVs, currently used in military applications, can’t access U.S. national airspace until the beginning of 2015. And initially, only limited drone activity will be permitted so that the Federal Aviation Administration can adjust its policies if need be.

Even then, observes Zuberi, companies like Amazon and UPS will likely stick to demo deployments for a while, as they figure out a raft of likely issues that extend well beyond picking up and delivering boxes to the right location. Among numerous other considerations, the companies will need to determine how to tightly integrate the technology into their supply chains and ensure the drones’ sensors can operate safely in crowded neighborhoods.

Zuberi thinks that by the time drones are flying paper towels to consumers, the technology will work as it should.

“I love where you have military and government use cases involved,” he says, “because they test and they test for resiliency and redundancy. These guys can’t have failures. Everything has to be perfect.”