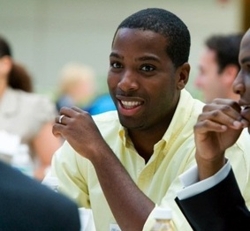 Yesterday, StrictlyVC featured software mogul Mitch Kapor, who noted that VCs aren’t paying enough attention to the changing demographics of the country — even if it’s good business for his own investment firm, which is paying close attention. Indeed, among other things, Kapor goes to events hosted by the Latino Startup Alliance and aligns himself with NewMe, a San Francisco-based accelerator focused on underrepresented entrepreneurs.

But Kapor isn’t alone in trying to wake up Silicon Valley. Tristan Walker, a Palo Alto-based entrepreneur who cut his teeth running business development at Foursquare and is now running his own still-stealth startup, is also doing what he can to shine a light on underrepresented groups.

It’s personal for Walker, who is African-American, which puts him in the company of just 1 percent of black tech entrepreneurs in Northern California. But like Kapor, Walker also believes proactively reaching out to African-American and Hispanic groups makes good business sense. We talked late last week.

A year or so ago, you set up the internship program Code2040 to bring black and Latino engineering undergrads to the Valley. Why?

Because for the first 24 years of my life, prior to coming here [to attend Stanford Business School], I had no idea that Silicon Valley was a place, let alone a great place. I don’t want people making the same mistake, so I thought [to] create an organization that gets black and Latino engineering graduates into internships in the Valley, and I enlisted one of my classmates [Laura Weidman Powers] to run it. In the summer of 2012, we had five fellows; this past summer, we had 18.

How does it work?

Startups only have so many resources to recruit at universities, so while you find [recruiters] at Stanford and M.I.T. and [the University of] Waterloo, my thinking was: What about engineering students at Harvey Mudd [College in Claremont, Calif.] and Stony Brook University [in New York], where I received my undergraduate degree? There are kids at these places who are incredibly talented and deserve that chance. So we visit these colleges, connect with administrators and students, educate them, and make it easier for [startups] to find great talent in the process.

Is this a pipeline problem or is there more to it?

It’s an access problem; there aren’t enough black folks here to put people in the network. But there’s an awareness problem, too. Growing up, I wanted to be an actor or athlete because I saw the Denzel Washingtons and Michael Jordans of the world. I also wanted to work on Wall Street, because those guys were very visible. As Silicon Valley becomes more visible to elite engineers who happen to be of color, the virtuous cycle will [begin]. I do think we’re at the start of something.

In another 30 years, the majority of people in the U.S. will be people of color. Is there more that VCs could be doing to target different demographics, so they aren’t playing catch-up later?

Also, think about it: years down the road, if I’m a startup founder building a mobile app, do I build a Spanish-language version first? Do I focus on Android or iPhone first? What do I do about people who can only pay in cash? There’s a seismic shift [coming]; we should be thinking about it from now.