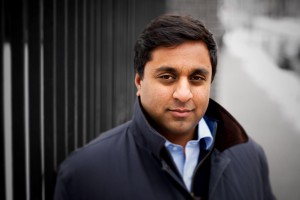 Semil Shah has a full-time job, spending most of each week doing mobile product marketing for a company called Swell in Palo Alto. The rest of the time, Shah is either writing a weekly column for TechCrunch; working as an informal (but paid) mobile technology consultant to several Sand Hill Road firms; or trying to participate in competitive seed-stage financings using a $1 million fund called Haystack that he raised last year.

Shah — who has so far backed 16 companies and is beginning to think about a $5 million to $10 million second fund – calls his schedule “not normal.” However unusual it may be, Shah could well represent the future of early-stage investing given its ongoing atomization. I talked with him about his immediate plans over coffee last week. Our conversation has been edited for length.

How does someone with a.) a regular job and b.) no investing track record raise a million dollars?

I’ve always been interested in investing and basically wanted to get practice, so I turned to [VCs and founders] who I know for help. There’s a ton of trust involved and every LP is different. Even just getting a $25,000 LP check from someone who has the means isn’t easy. But I think people knew that I wanted to do it and was having a hard time, and [eventually] I sort of passed the passion test. I also invested some of my own money [in the pool] and didn’t charge a management fee.

How has it been going?

I’ve now invested in 16 startups across four areas, including marketplaces, core infrastructure, online and offline commerce logistics, and mobile computing. Quite a few are doing well, including Hired [which marries tech talent with jobs]; Paddle8 [a virtual art auction house that has already gone on to raise a Series B round] and Instacart [a same-day delivery grocery startup that counts Sequoia Capital’s Mike Moritz as a board member].

What size checks are you writing, and what are you getting in return for them?

I can write between checks of between $25,000 and $100,000, though they’ve usually been around $25,000. And as someone on the edge of these deals, you aren’t setting the terms; you’re asking to be in the deal. For me, you take what you can get. It’s very competitive; I was surprised by how competitive it is.

How are you selling yourself to sought-after entrepreneurs?

I do think that by working full-time in mobile, I connect better with entrepreneurs because my operational knowledge is sharper. I also tell everyone my terms of engagement, which are that I’m on call for the entrepreneurs. I let them know that I think [they’ll] figure out what they need to do, then to call me if I can help in a certain area or just to talk to, because I’m not one of the big players. I kind of underpromise and try to be helpful and available, rather than say, “I’m going to do all these awesome things for you.”

For those who might like to do what you’re doing, how would you advise them to separate themselves from the pack?

I think firms and individuals have to brand themselves because it’s so competitive, and there are three ways to do it: there’s content marketing, including through blogs and social media; there’s referral marketing – you work with someone and give them an amazing reference; and there’s performance marketing. At the beginning, what do you do? You media market to gain exposure. Either way, entrepreneurs are smart; they figure out [who adds value and who doesn’t].

Any big surprises now that you’re so entrenched in the market? What trends are you seeing?

There are a lot of companies coming out of Y Combinator and [other high-profile incubators] that are getting fancy with terms and trying to get cute with the caps, and the market doesn’t really bear that out. I think sometimes with first-time founders, you get into the game, and you just get caught up in everything.

I think another thing that most people on the founding side don’t understand is the exit profile of most companies. There’s a $20 million to $50 million band, and a $50 million to $100 million band, then the curve just drops. Entrepreneurs and investors publicly say, “Oh, we’re not going to talk about exits,” but everyone is silently making their own exit profile when they’re considering making an investment.

Do you think when the time comes to raise a second fund, investors will be ready to bet on you again?

I hope so. I’ve gotten lot of inbound [deal flow] from my other deals. I feel like I’ve passed the trust threshold and also the he-got-into-early deals threshold. I want to be investing in private, early-stage technology for the rest of my life.