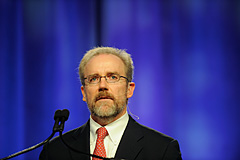 Terry McGuire, the cofounder of the venerable venture firm Polaris Partners, was recently in San Francisco from Boston. As we caught up over coffee at a bustling cafe, the longtime healthcare investor — whose firm divides its resources between healthcare and IT deals and writes checks from $50,000 to $60 million — shared where he’s finding the best deals right now and why he doubts VCs’ sudden interest in healthcare will last long. Our chat has been edited for length.

Healthcare is hot again, with even consumer VCs like Bill Gurley taking an interest. How do you feel about that?

It’s wonderful that healthcare is hot again, and as consumers of healthcare, we should be thrilled. Technology is going to allow us to live longer, happier lives. The opportunities are changing and at a speed that’s accelerating, which has an impact on drugs and devices; bringing them to market is improving.

On the life sciences side, billion-dollar exits aren’t as common as on the tech side, where speed to market is fast, things are more capital efficient, and the virality of markets are much more interesting. So you go through these wonderful moments as now, when everyone is again a healthcare investor, but in three years, they won’t be.

To me, the biggest question mark is how does pressure on health care spend impact healthcare investing. I think in some cases it’s going to be a liability and in some cases an opportunity. There’s only so much money to go around.

So where do you see the best opportunities right now?

I’m following the whole biologics space — antibodies, peptides, the genetics space more broadly. It’s become exciting. We just funded a company in the business of editing the genome, so finding ways to knock down something that the body is producing too much of, for example.

We’re also interested in the delivery of biologics. Most drugs are taken orally, and if a pill is chemical-based, it can probably withstand your stomach acids. With biologics, our stomachs do a good job of chomping up everything that [passes through them]. If you can improve delivery – most [biologics today, like insulin] are delivered intravenously or through injections – that’s interesting.

What about medical devices?

They’re out of favor, so I personally think the next five or six years will be marked by interesting medical device plays. When a sector is out of favor, entrepreneurs tend to be incredibly disciplined and efficient and clever. They know capital isn’t free and that if they need to go out for capital, it’s going to be expensive because the prices are low.

And medical devices will always be a part of our healthcare system, and they’re only going to become more intelligent and more functional. In five years, people will be saying, “I wish I had been in this and that device deal.”

Four of Polaris’s life sciences companies were acquired last year and another four went public. But the market cooled toward biotechs toward year end. Do you have any concerns about 2014?

I’m delighted that public buyers had a reawakening when it came to biotechnology. People clearly thought there was a lot of good stuff going on last year. I’d just want people to pace themselves. If things went wrong, it would be because expectations were high.

Mood is a strange thing. People get negative, then something breaks open – a drug gets approved or earnings come out that are better than expected – and people say, “Why was I sitting on the sidelines?” and they race over. That kind of funny dynamic concerns me more than the companies themselves.