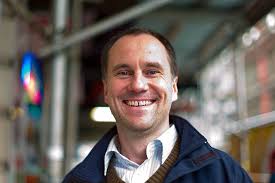 Earlier this week, Albert Wenger, a managing partner at Union Square Ventures, departed from the standard VC script of promoting his own startups to discourse about the future of mankind. He shared his views on stage at the DLD (for Digital Life Design) conference in Munich. More specifically, he talked about where we are in the Information Age and what the past can tell us about the future.

It’s a 15-minute long chat that you can watch for yourself, but here were some of Wenger’s most interesting observations:

Innovations often come in disruptive, complementary pairs, though it isn’t always obvious at the time. As examples, Wenger pointed to agriculture and the domestication of animals, including horses. The two are seemingly nonlinear, but horses “become more valuable to you if you’ve got agriculture, and vice versa,” he noted. Wenger also pointed to power and manufacturing (steam and electric power enabled the latter); chemistry and deep mining (“We didn’t find out what the air was made of until the late 1700s; we didn’t figure out how to isolate a lot of elements until the early 1800s”); and computers and networks.

These disruptions have had significant social implications. In the Stone Age, he noted, “there was no property or communal property.” Then, we “moved to the Agrarian Age, and people who had property had power, and those who didn’t, [didn’t].” It was only in the Industrial Age that people began to have “this really strong notion of personal, individual property that’s truly yours,” including intellectual property, he said.

Indeed, “a lot of what we take for granted are relatively new” developments, and what may seem immutable today is, in fact, highly variable. Take government. “We’ve gone from tribes to fiefdoms to kingdoms to empires to nation states. What do we want the [next] unit of governance to be?” It’s “up for grabs,” said Wenger, and “we should be thinking about what it should be.”

Privacy is “another very modern construct,” observed Wenger. “Foragers didn’t have privacy; they were living in caves. Early agrarian societies lived in very tiny villages. I think we need to question … exactly what we mean when we [say] we want to protect data.”

How we make a living has also changed time and again. In the Stone Age, it was “a communal thing.” In the Agrarian Age, “people sold what they made.” It was “only in the Industrial Age where we switched to a model where we’re paid for our time — and that turned out not to be a very good model for a lot of people,” making “that, too, up for grabs again.”

Ultimately, argued Wenger, “Because we’ve come from long periods where scarcity was the dominant paradigm, it’s led to a lot of things we may be able to replace.”

The question, he concluded, is “what we want it to look like. And I don’t think we know yet,” he said.