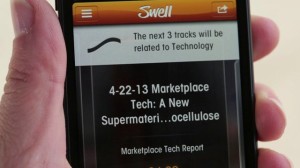 It’s hard to find an overlooked niche, but Palo Alto-based Concept.io may have found one with Swell, a seven-month-old smartphone app focused on streaming personalized news radio.

Unlike competitors whose users choose what they want to hear, Swell is a discovery service that learns users’ listening preferences over time and pushes them content they’re liable to enjoy. Don’t like what’s streaming? Swipe, it’s on to the next story.

The app is easy, even delightful, particularly for fans of NPR, the BBC or Comedy Channel — just three of Swell’s growing number of content partners.

The question is whether young app users will embrace it in large enough numbers. Pew Research Center’s recent surveys find that while nearly 60 percent of Baby Boomers say they enjoy following the news “a lot,” the number drops to 45 percent of Gen Xers and just 29 percent of Millennials, a generational difference that has remained virtually unchanged over years of surveys. (When it comes to news radio, specifically, 38 percent of Gen-Xers and 27 percent of Millennials tell Pew they’ve consumed news radio as recently as “yesterday.”)

To learn more about who’s using the app and when and what’s next, I caught up with Concept.io founder and CEO Ram Ramkumar, whose last company, SnapTell, sold to Amazon in 2009. Our chat has been edited for length.

How did the idea of Swell come about?

We really wanted to build a product that people would use every day and that would really engage users and make use of their time when they’re driving or exercising – time that’s underutilized, generally.

Much of product’s allure is that you just turn it on, like the music discovery service Pandora. Broadly speaking, how does the personalization technology work?

It’s complicated. Let’s say you’re interested in startups, and perhaps you love long content in the afternoon and shorter content in the morning. Well, we have to manage the freshness of the content, which is unique to the spoken word. If you think about it, music is relatively evergreen, but with news or stories, you don’t want to hear something that’s stale, so it’s a difficult problem. We’re shifting through thousands of individual tracks and finding the ones that you most want.

Are there any humans involved?

We have an audio curator who comes from the radio world and curates the content that goes into Swell at a program level. After that, an algorithm kicks in your preferences, so someone who loves the “Freakanomics Radio” show might like an Economist podcast. Then, the most powerful element comes into play, which is the community network effect, where what Swell’s hundreds of thousands of users love gets automatically promoted — and what they don’t love is less likely to show up in your queue.

So Swell has hundreds of thousands of users?

Yes, hundreds of thousands and not millions yet, but it’s growing gradually. And we have really strong engagement. We see more than 40 minutes of listening per day and over four hours of listening per week. There’s a big uptick in the morning and also in the afternoon, when people are commuting.

And eventually, you’ll insert ads into the stream, a la Pandora?

Right. Ads and subscriptions are the way to go, though there are also special things you can do, like offering users access to their entire listening histories so they can search through what they’ve listened to in the past. So we can do premium features along with advertising as it gets to critical mass. What we’re working on next is adding identity and a social layer to the product, so you can sign into Swell and see what your friends are listening to and share.

You raised $5.5 million from Google Ventures and others last summer. Is that expected to last you a couple of years? Are you interested in raising more yet?

We’ve had interest and continue to have interest. Our A round was preemptive – someone called and wanted to invest — and there’s a possibility that that will happen again. But we’re not looking to raise money.