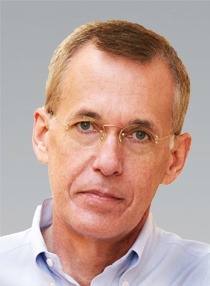 It’s easy to poke fun at Russia as the land of graft, corruption and side-by-side toilets. But you quickly get the impression that six-year-old Almaz Capital — an early-stage venture firm that has offices in Menlo Park and Moscow and is focused on bridging the two worlds – has been laughing all the way to the bank.

I talked with Almaz general partner Geoff Baehr yesterday afternoon to learn more about Almaz and how it handles not entirely flattering perceptions about doing business with Russia. Our conversation has been edited for length.

You were a chief network officer at Sun Microsystems, then spent a decade or so with U.S. Venture Partners. How did you wind up at Almaz?

At Sun, in 1990, we decided to go [abroad] at the fall of the Soviet Union to find the best engineers we could find. And the first guy we met was [Almaz founder] Sasha Galitsky, who was the chief engineer overseeing 1,500 engineers at the Soviet Space Agency. He eventually left to start a 20-person company and that was [Sun’s] first investment outside of the U.S. Sasha and I have known each other since.

What makes it work is the fact that Sasha is a very well-connected guy who’s very visible in Russia and was one of the first VCs there.

Almaz was an early investor in Yandex, the now-public Russian Internet company. Do all of the firm’s investments have to have ties to Russia? And what percentage of your deals have originated in Russia versus the U.S.?

Many do have engineering [hubs] in Russian and build out sales and marketing here, or we fund companies here that are building for the Russian market. Some of our LPs require that there be a Russian angle — that’s why they gave us the money. But we don’t try to [orchestrate] unnatural acts. If it’s a really good company here in the U.S., we’ll do it [regardless].

About 75 percent of the [dozen or so] companies from our first fund originated in Russia, but by and large the focus has been to go global.

What are some of the advantages of knowing Russia so well?

For one thing, the educational system in Russia during Soviet times was exceptional; there would be an entire institute focused on statistics or higher mathematics, kind of like single-subject graduate schools. And there are still pools of talented people with specialized knowledge that you can avail yourself of.

Most American people also have no idea how tightly you can draw a belt around your waist. In terms of lean, you haven’t seen lean until [you’ve seen Russian entrepreneurs]; they’d eat their own shoe leather. They worry this might be the only shot they’ll get, so they watch where every dollar goes.

Yet there’s always concern over who controls what in Russia. Do you have to overcome those worries?

We always deal with the “those Russians” question. Sure, there’s a perception that there’s problems with graft and corruption. But entrepreneurs manage to survive and do well and things are always evolving. I was at a massive conference in Moscow and the Premier was there taking questions and this one guy put up his hand and said, “I’d like to point out that all the entrepreneurial [tech] successes out of Russia have done their flotations outside of Russia and kept their intellectual property outside of Russia.” A whole bunch of people moved away from this person as he was talking, by the way. [Laughs.] But the Premier said, “We’ve only been doing this for 25 years. We’re working on it but it evolves at the pace that it evolves.”

At Almaz, we don’t do business with oligarchs. We have very professional LPs that include Eric Schmidt, the World Bank, and Cisco, and we operate a very straightforward model using only top-tier financial to legal firms. If someone says “those Russians” and our name in the same sentence, we’re toast. Our reputation is everything to us.

I understand you’ve almost closed a second fund that’s much bigger than your first, $79 million fund. Can you comment? Also, any lessons learned at Almaz that were new to you, even as a longtime VC?

I can’t comment on the new fund, I’m afraid. As for lessons: We had a saying at Sun that you should work with people you like, have fun, and maybe make some money. And it’s true. There’s a lot to be said for working with someone for whom you have infinite respect and who you consider a lifelong friend. There are worse jobs.