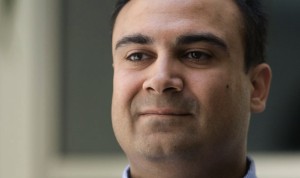 When I first met Manu Kumar of K9 Ventures, nearly five years ago, he was a successful entrepreneur who was trying to break into micro VC and he was going it alone. As he said then, “I didn’t want to jump into partnering with someone just because it fulfills an LP criteria.”

He still doesn’t want to take the plunge. Though Kumar went from investing a $6.25 million fund that he closed in 2009, to a $40 million fund closed in the summer of 2012, he hasn’t brought anyone aboard and that doesn’t look to change any time soon.

Kumar – who writes initial checks of between $250,000 and $750,000 to very nascent startups with which he works closely — explained why over tea in San Francisco.

Well, it’s true that K9 is one of the few solo GP funds without any associates. I don’t have a formal advisory network, either, though I do have people in my network who, when I’m looking at a deal, I’ll say, “Take a look at this and tell me what you think.”

What’s the hardest part about operating the way you do?

People say to me, “Your partner meetings must be really short.” But it’s more like they never end, because you’re constantly thinking about the companies and what they’re doing and what issues they have. I think the hardest part is just finding that balance between how engaged you want to get.

Also, there’s no fallback. If I decide that I’m going to go to Tahoe for three days, there’s no one else who’s going to take my spot. If the companies need something, I still need to be accessible and available.

So why not team up with someone?

Knowing what you know about being a solo operator, does it make you more or less inclined to fund single-founder startups?

I’m not opposed to and am comfortable with single founders; I’ve seen lots of companies do well with them. It definitely requires more work, though. Probably the single-most important thing there is helping them to ride that emotional rollercoaster. If you’re on your own, you have no one to talk to.

You’re investing a $40 million fund right now. Does that amount allow you to do seed, A deals, and Series B deals? I know the idea was to invest in roughly 30 companies.

I typically pass on Series B and C, and some would have been great investments, but I can’t do that with the amount of capital I’m managing. [Among K9’s investments are the cloud communications company Twilio, the ride-sharing service Lyft, and the camera company Lytro, which have gone on to raise $104 million, $83 million, and $90 million, respectively.]

Are you able to get your pro rata share of Series A deals? It seems like that’s becoming harder to do with seed investors’ strongest companies.

It’s happened to me a couple of times where I haven’t gotten as much pro rata as I wanted in a deal. I’ve addressed that now by making it very clear to the founders, right at the time when I invest in them, that if I’m going to back them at the seed, they have to go to bat for me when it’s time [to raise more money]. They have to stand up to the next round investor, because the founders are the only ones who have the leverage in that situation.

I don’t suppose the bigger VCs are willing to negotiate?

In one case, I almost called up a firm and said, “Hey, you’ve invested in two of my companies. If you don’t give me my pro rata, you won’t get to get to see a third one.”

In that case, I actually did get my pro rata [before resorting to that].

Look, I don’t have any leverage now, but if you want good karma in the future, you better give me my pro rata. [Laughs.]