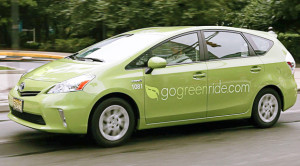 Across the U.S., new car-sharing services Lyft and Sidecar are spreading fast, while Uber, which now manages a ride-share service as well as connects passengers with career drivers, seems destined for world domination.

In short, it doesn’t sound like a great time to launch a new car service. Yet that’s exactly what Yamandou Alexander has done with GoGreenRide, a New York-based startup that Alexander has bootstrapped with $2.5 million of his own capital. (GoGreenRide is currently halfway through raising a new, $5 million outside round of fundraising.)

Oddly, Alexander may have had the idea of an alternative transportation fleet first. As the French-born entrepreneur tells it, he moved to New York City at 19, bussing tables at famed Upper East Side restaurant Daniel and selling Motorola Startacs to his coworkers, many of them fellow immigrants. He eventually began exporting the handsets to Africa, creating one telecom company and selling a second for enough money in 2012 to bring to life a concept he wanted, but couldn’t afford, to pursue in 2006 – a nicer, greener, more affordable version of a black car service.

We chatted recently about how that vision is coming together and why GoGreenRide makes sense now, even in a ride-sharing economy.

Your business differentiates itself in two key ways. For one thing, GoGreenRide owns or leases dozens of Prius cars. You also have 40 full-time employees, rather than contractors. You’re like the anti-Uber, except that Uber is so profitable precisely because it has so little overhead. Why does your strategy make sense?

With contractors, there’s a lack of control in presentation, quality, and customer service. We want our drivers to wear a uniform; to work on a schedule, rather than when they feel like it; to open doors; and to understand when it isn’t time to talk. We want to provide good, consistent customer service. We’re also concerned with Uber’s model from a liability standpoint.

As for the cars, based on plans to increase our fleet to 50 cars by summer, the company should reach break-even by December. Next year, the car should see a 13 percent EBITDA…and by 2018, 26 percent EBITDA.

Where are you turning to fund those plans?

We’re talking with VCs. Investors on the West Coast are more interested in less capital-intensive businesses, but we’re getting good traction with East Coast people who know and live the experience of trying to find transportation in New York. We’re also going out to AngelList for additional investment, and inviting GoGreenRide members to participate.

Uber gets a lot of flack for its surge pricing. Is your pricing flexible, too?

Pricing does fluctuate based on traffic conditions. But you always know how much you’ll pay before you get in a car via our mobile app, which sends you detailed information about your trip, including when the driver will arrive. Our metering is calculated based on the estimated time [it will take to transport a passenger from A to B], which we know based on historical data about traffic patterns.

As an alternative to black car service, what percent of your business comes from corporate partnerships?

About 40 percent. We cater to both customers taking long trips, who might otherwise take a black car service to the airport, and short trips, where we’re competing more directly with taxis. Our average fare is $34, which is the same as a yellow cab, but you’re getting a much nicer experience with GoGreenRide.

Beyond expanding your fleet, what’s on your road map, so to speak?

The short-term growth opportunity is for us to grow our model in New York, then move into L.A. or San Francisco. We’re also starting a franchising program, including [helping launch] a GoGreenRide in China.

We glad for Uber’s success and the acceptance it has gained in New York. But we also see a lot of people coming to us from them because of pricing, level of service, reliability, and safety.