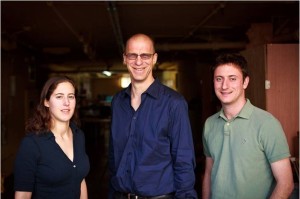 Lemnos Labs, a hardware accelerator in San Francisco, is taking the wraps off a new, $20 million fund this morning. It’s quite an accomplishment. Three years ago, when founders Jeremy Conrad and Helen Zelman pitched investors on the idea of a hardware incubator, they were brushed off time and again.

Then the pair, both M.I.T.-trained mechanical engineers, sat down with AngelList’s Naval Ravikant. “We got in front of him, and he said, ‘I love this, and I’m going to introduce you to other people,’” recalls Conrad. “And of course, because it’s Naval, it was like a 15-minute long discussion so he could get to another meeting.”

It was long enough. After raising $1.85 million from investors to launch Lemnos Labs, Conrad and Zelman have spent the last two years investing $50,000 to $100,000 in promising teams, the first 10 of which have gone on to raise over $35 million in funding. One is Airware, which makes logic boards, sensors and actuators for drones; another is Local Motion, a company whose device helps enterprises manage their fleet of vehicles. Andreessen Horowitz led the funding of both.

I recently stopped by Lemnos’ new 8,000-square warehouse — a former fish factory — to learn from Conrad what’s next.

You have a new fund, and a new partner, Eric Klein, a former entrepreneur-in-residence who you promoted in February. Have the three of you begun investing the new fund?

We started investing a few months ago, and we’ve made three investments, one of which is still stealth. The first, Ceres, is a drone company that monitors crops. The other is 6Sensor, which is building a handheld device that you can use to test food for gluten and that will eventually test dairy, shellfish, and peanuts.

We focus on five areas. About 20 percent is in aerospace: we’ve already [backed] three drone-related companies and a satellite company. Watching the growth in those areas over the last two years has been phenomenal. Robotics is also a big focus area for us, as is the “Internet of things,” transportation, and general consumer electronics.

Is there any hardware sector you’d actively avoid investing in because it’s overdone?

One area that’s pretty overheated right now is wearables, and wearables that are narrowly focused. Also, fashion tech. There’s some stuff that’s interesting, but we’ve seen a bunch of applications for things like clothes that light up.

A couple of years into this, what patterns are you starting to see? What’s a common mistake young hardware startups make?

One mistake centers on brand, interestingly. This is [advice dating back to] Proctor & Gamble, but brand is everything, and if you pick the wrong brand, and it’s too small of a target market, you can’t get the traction you need to get further funding.

Take Jawbone, which is almost a meaningless brand but [has come to represent] quality. It has this huge market because basically everybody can buy from it. But startups often make branding choices early on that limit their market size. If you go to a venture capitalist and say, “Every skater in the world want this,” the investor’s question is going to be: “Okay, but are there enough skaters in the world to [rationalize this investment]?

Also, there’s almost this mythology that you do this prototype, and it goes to China and gets manufactured. People always undervalue how much on-the-ground work you need to do in China to ensure your product meets your quality standards and that you’ve done the right testing.

How are you helping them solve those issues?

We have a set of contract manufacturers who we feel work well with startups. We also make [our startups] do a product requirements document, which gets really into the details of not just design for manufacturability but also design for usability. We have a company, Bia, that does a sports watch for female triathletes, and at the end of the day, it has to go into salt water and to survive cold and heat. It’s very different than 6Sensors, which will go in a pocket or purse. There’s no expectation that I can dunk [its product] in salt water for 45 minutes and that it will still work.

How have you gone about forming the kinds of relationships with investors that help ensure your companies get seen?

It’s just good old-fashioned hustle. I spent a year going to every event I could possibly attend and hustling everyone and convincing them that we’re interesting enough to visit. After you get traction, you get more introductions. And after Airware’s funding happened, a couple of VCs who hadn’t responded to emails were definitely like, “I don’t know how I missed [your note], I’d love to come by.” [Laughs.]