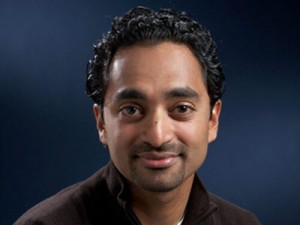 Chamath Palihapitiya, a former Facebook executive who opened his own investment firm, Social+Capital Partnership, in 2011, wants all of us to get rich on bitcoin. Such was his repeated message yesterday during a sit-down with reporter Brad Stone at a packed bitcoin conference in San Francisco. In fact, he argued that everyone should have “1 percent” of their assets in the digital currency, so that when it appreciates even more wildly, most people won’t be left further behind economically.

Of course, Palihapitiya has plenty of reasons to be evangelizing the importance of bitcoin. In fact, he has around 100,000 of them. (That’s roughly how many bitcoin Palihapitiya said he controls, and at a cost basis of less than $100. One bitcoin is worth $522 as of this morning.)

For readers who might have missed the discussion and want a better idea of Palihapitiya’s thinking, below are some of the arguments he made yesterday.

On investing directly in the currency, versus investing in mining hardware companies and the like:

“My background is in [electrical engineering], [some of the mining entrepreneurs I’d met with] didn’t even know what the [term] ‘tape out’ was…you know, I didn’t want to spend $20 million to $40 million to tape out a chip that could be obsolete by the time they got it out of the fab.

All along, I’ve been specific that I think bitcoin as a store of value has immense more ability to appreciate than any company necessarily. It doesn’t mean that investing in a company is bad; it just means that, if given the choice – and I have that flexibility [with Social+Capital] – I chose to just invest in the bitcoin.”

On how owning bitcoin “effects change,” which is partly the mission, Palihapitiya has said, of Social+Capital:

“It’s progressing a set of financial changes that fundamentally empower a distributed class and disadvantages entrenched interests, and from that perspective, I think we should absolutely want that type of thing to win. So when I specifically buy bitcoin, what I’m thinking to myself is: I’m using my own personal capital to hopefully prop up and support something that would rip apart the existing financial system, and if it does, God bless it.

What will happen is [that] individuals on the right side of history, on the right side of justice, will benefit. Individuals will be able to get access to capital easier…to transact cheaper..and not get cheated. Example: for those of us who are not white and weren’t born here, who send money back to a third world country, you will know there are thugs who stand outside these money depots and will basically charge you like a cover charge to go inside and get your [cash]. So when I send money to Sri Lanka, my uncle or my cousin may only get $70 because he has to [pay] just to get through the front door. And that’s bulls__t.”

On whether he’s optimistic about alternatives to bitcoin, like the payment service Ripple:

“No. That’s kind of like saying, ‘You’ve had a taste of the Internet; [now] I’d like you to go back to these AOL chat rooms.’ It’s like, who cares. Let’s focus our energy on the thing that’s [most likely to make it] …Fundamentally, people are just arbitraging a trend. I think it’s fine if some people can speculate and make some money off it. Whatever. But the overwhelming majority of our money and time and intellectual horsepower should be allocated to bitcoin … because it has the chance.”

On whether there were growth patterns at Facebook that Palihapitiya is seeing replicated with bitcoin:

“Absolutely. One of the projects I worked on very early on [at Facebook] was our platform, and we had a way of looking at our platform API usage to kind of think about what was happening in the ecosystem as a corollary to what would happen to our user growth. And [at Social + Capital] we’ve been doing a lot of that same analysis here, and we see a lot of similar patterns [with bitcoin], and we think that’s really constructive. When you look at bitcoin and its distributed use [and the numbers of developers writing to it], it’s really impressive.”

“I’d like to buy more…Honestly, it’s probably the single biggest high beta investment opportunity of all. That’s why I really think it should be owned by as many people as possible, because if we look back, 30 years [from now] and these things are a million [dollars] a coin, I think it would be better if many people had shared in that appreciation instead of a few. That’s why I’m evangelical about it … We should all participate in this upside. Because I think it’s going to happen, and what shouldn’t happen is that a few should control all [of it].”