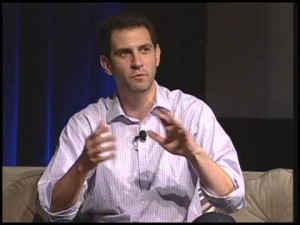 It seems like yesterday that Hunter Walk and Satya Patel officially closed their first $35 million venture fund, but it was actually early last summer. And in the life of a seed-stage firm like Homebrew — where Walk and Patel have two-thirds of their capital reserved for follow-on investments — that’s an eternity.

No wonder Walk – who previously worked for nine years at Google – and Patel – who logged a decade at Google, Battery Ventures, and Twitter – are already thinking about what a second fund might look like. Walk and I talked about it last week over a burger at a San Francisco eatery. Our conversation has been edited for length.

You say you focus on the “bottom-up economy,” services and tools that make it possible for small players to compete with big companies, including, more recently, looking at bitcoin as a bottom-up currency; 3D printing as bottom-up manufacturing; and drones as bottom-up satellites. How else does Homebrew distinguish itself?

We didn’t create Homebrew to create more noise in a crowded marketplace. We felt there was still a pretty small number of seed-stage funds that will be around for a long time, that have been started by former operators, and that want to take front-of-the-round positions.

Why makes you better positioned than some?

First, having a partner who has done venture before [is a big advantage]. There’s also a set of best practices and certain frameworks and models that we’ve thought about in advance — such as [around] what cash flow and portfolio management look like — that sometimes folks who’ve only come from an operating background or angel investor background don’t really understand.

You’ve told me you could have raised more money last year. Will you go bigger the next time and will we see a third partner?

That’s something we’ve discussed only lightly and I don’t think we’d do it in the near future. In some ways, we started Homebrew because we didn’t want to join existing funds . . . And so it’s this ironic situation where, if we were to try to find a third or fourth partner down the road, would we suddenly be the incumbent? How would we attract an entrepreneurial VC versus someone who just sees us as an existing fund? So we have to think about all that.

I think the incentives are to raise more money, [between] management fees, ego, and deal flow optionality – you get exposed to a lot of things you want to invest in. But we’re not doing this to [eventually] raise a $500 million multistage fund or become a 12-partner business that builds out shared services and competes with billion-dollar funds. We know firmly which side of the [investing] barbell we want to be on.

Roughly one year into this endeavor, what’s been the biggest surprise?

With venture — and I think it’s one of the reasons I write so much, working through my own learnings – the fund cycle is long. Satya just saw two exits from companies he invested in at Battery in 2007 and 2008. So you want to bring a sense of urgency every day, to lean in and help [your startups], but you also have to manage your own energy and keep the founders who are burning hard every day in the right frame of mind.

By making their lives simpler [and doing what you can] to clear the road ahead. We also ensure boards are formed with an outside board member. Most seed investors don’t ask for a board seat and don’t care if there’s an outside board member. We care a lot, not because we want control but because we want first-time founders to build confidence and a management cadence and, when it comes time to raise a Series A, signal to other investors that theirs is a company that’s been operating with some maturity.

You don’t need a bunch of people around the table. But having worked for strong founders [at Google and Twitter] and seen the benefit of founder-driven companies — not just in year one but in year 10 — we want folks who are building something that, in their head, will be around a while. And our job is to help prepare them for that, because it’s not easy.