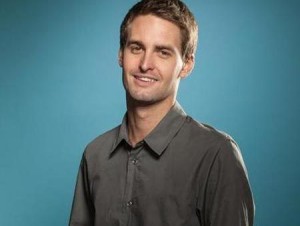 Almost a week ago, some odious years-old emails written by Snapchat CEO Evan Spiegel were leaked to the media, and it’s a wonder how quickly their content seems to be have been swept under the rug.

It’s understandable, to a point. Spiegel’s emails were written when he was a college student trying to impress his fraternity brothers, not the CEO of Snapchat. Emails are also private communications that, very arguably, should remain private.

Besides, it isn’t like Spiegel holds public office. He never signed up to be a role model. He certainly shouldn’t be held accountable for a culture in which objectifying women not only remains socially acceptable but, for some, seems to border on a competitive sport.

Still, Spiegel’s lone public apology, in which he said he was “mortified and embarrassed,” didn’t go far enough. How about some response from others close to the company, the same people who blog and tweet and talk so openly with reporters about how Silicon Valley is changing the world?

On Friday, Stanford Provost John Etchemendy emailed the university’s student body to say the school is “positively ashamed” that the emails were sent by a Stanford student.

If Snapchat’s influential investors are also ashamed of the noxious attitudes toward women that were conveyed in those emails, they should also say something. It’s easy enough to condemn their content without hanging Spiegel out to dry. And frankly, not doing anything seems like an implicit endorsement, as if what Spiegel wrote isn’t that bad. (It is.)

“We can choose to turn a blind eye to such statements and chalk them up to youthful indiscretion,” wrote Etchemendy to Stanford’s undergraduates. “Or we can be more courageous, and affirmatively reject such behavior whenever and wherever we see it, even — no especially — if it comes from a friend, a classmate, or a colleague.”

Nobody’s going to change Silicon Valley’s attitude towards women overnight, but here’s hoping Etchemendy’s message resonates not only with the men and women of Stanford but with Snapchat’s board, as well. A few choice words could help send the message that objectifying women isn’t okay, no matter how “hot” your company might happen to be.