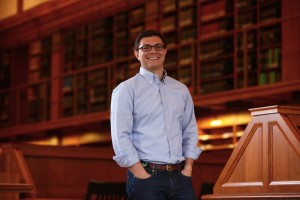 Earnest is a startup that provides small loans to people based on their earning potential. But its marketing may be more savvy than earnest.

For now, the company is selling itself as an alternative for people who have trouble nabbing an affordable loan. The big difference between Earnest and traditional lenders is that Earnest looks beyond credit history to where a person attended school, what she studied, and her current job and income. The proposition isn’t so unlike that of another venture-backed startup, Upstart, which also recently jumped into the small loans business, though Earnest asks applicants for much more information, including access to their checking, savings, investment, and retirement account balances. (Both companies employ language about giving “financially responsible” clients the rates they “deserve.”)

It’s an intriguing proposition. It’s also mostly a teaser, unsurprisingly. Earnest says it can afford to charge lower interest rates than most because its technology has lowered its own costs. But the loans that Earnest offers customers — 5.5 percent interest on a one-year loan and 6.5 percent for a two-year loan of up to $20,000 – aren’t just hard to beat; they’re too low margin for Earnest to produce a meaningful return for the investors who’ve given the year-old company $15 million (money, by the way, that Earnest is partly using to extend to new customers). To learn more about what’s going on — and what’s next — I talked yesterday with Earnest founder Louis Beryl, a Princeton and HBS graduate who has worked on Wall Street and at Andreessen Horowitz. Our chat, edited for length, follows.

You spent a year-and-a-half at Andreessen Horowitz before founding Earnest. What were you doing exactly, and how did it lead to this company?

When I was coming out of [HBS], I was hired as an internal data scientist to look across [Andreessen Horowitz’s] portfolio at how we were making investments [such as] looking at how a team’s make-up changes as it grows. [Andreessen Horowitz] wants to help that great founder build a great company, and being able to anticipate in advance who [startups] need to bring on and in what capacity [is a big part of its value add].

I also did more traditional VC stuff, including looking at financial technology companies. As it relates to Earnest, I started thinking: If you were going to build a financial services company from scratch, using data to understand people, how would you do that?

Earnest says it can lend to someone at a very low rate because that person is so low risk. It doesn’t take origination fees, either. So are you counting on zero defaults, or are your products basically loss leaders, or both?

We’re making loans to very credit worthy, very responsible [customers] so yes [to your question about defaults]. We also plan to expand with [clients] over time. If you’re someone who takes a $15,000 to $20,000 loan out of graduate school, we hope to provide other products for you as your situation changes. We’re laser focused on the products we’ve just launched, but we’re going to listen and if [our customers] want credit cards, we’ll move into that. If they want home or car or student loans or a deferral product because they have low cash flow today . . . we’ll move into that.

Are you interested in the financial advisory business, as with a Wealthfront? You’re asking for an awful lot of financial information from your potential customers.

We’re not interested in Wealthfront’s business, though we think we’d be complementary to them and maybe [attract] the same types of people.

Hundreds of people come to our site and enter their information on a regular basis. You could choose not to give over much information, but a lender who doesn’t understand you well has to [charge you more interest]. We say that if you deserve better, we’ll price you at a lower rate than anything in the market.

This is a low-margin business, that’s a fact. . . But we’re not here trying to make the highest margin on every client . . . We’re similar to Amazon in that we’re always thinking how we can deliver the lowest-cost product that delivers happiness to consumers every day. This is a very mission-driven organization. We believe we’re building the modern bank of the next generation.