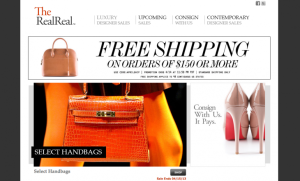 Holding up the bag for closer inspection, Wetzbarger shakes his head. “The Louis Vuitton Neverfull is like the unofficial bag of Asia; it’s so popular that everyone has one or more than one.” This, adds Wetzbarger, is no Neverfull, pointing to the quality of purse’s lining, its exposed zipper tape, and a spot of loose stitching. “It’s also more slouchy than it should be [given its age]. Then, when we look at the date code, the formatting is all wrong, too.” He shows me a leather tag featuring a number series. “This combination would mean it was made in the 84th week of 1962.” [Eye roll.] Louis Vuitton “wasn’t even doing date codes until the ‘80s.”

The devil is truly in the details for The RealReal, a fast-growing online marketplace that’s taking business from both eBay and Sotheby’s by making it simple for dowagers and other well-heeled consumers to sell their lightly used designer goods. The company is now processing roughly 40,000 pieces of clothing, shoes, handbags, fine jewelry and fine art a month, and this year, it projects that it will do more than $100 million in revenue. In fact, the business is growing so quickly that the biggest challenge for Julie Wainwright, RealReal’s founder and CEO, is managing all the moving parts of her business.

It’s easy to see why 2.5 million people have registered to use the site. The RealReal takes authenticity so seriously that it employs authenticators like Wetzbarger, along with a staff gemologist, and a horologist. In addition, the company trains its customer-facing teams on how to spot and handle “fakes.”

The RealReal also makes it easy for its growing base of consigners to turn underused items in their home into cash. To sell an item, a consumer simply sends an item to the company based on the list of 750 brands like Chanel and Prada that RealReal accepts. RealReal also has 30 salespeople around the country who visit clients’ homes, which “allows us to get product we’d never get, from people who’d never even think of consigning,” says Wainwright. In return for doing practically nothing, consigners receive up to 70 percent of each sale.

Once they do, they’re hooked, Wainwright says. “When people get their first check, they’re delighted. They had no idea they had that much money sitting around their house.”

In fact, says Wainwright, she’s begun to notice a change in consumer behavior that bodes well for RealReal. “Once people start consigning, they change the way they buy retail. Once they understand the value of the resell items, they [rationalize more new purchases], knowing they can pay a high price . . . and make a lot of that money back by reselling [those goods].”

Still, the company has its challenges, the biggest of which, right now, is managing its growth. “It’s hard,” says Wainwright candidly. She points to the company’s two-story warehouse in Manhattan, which has been a headache for the company since almost the start. Because it’s union-controlled, no one can operate the elevator on Saturdays or Sundays. Time Warner Cable, which goes down regularly in the city, only recently approved a two-year-old order for fiber.

Fortunately, the company will soon vacate the city and move into a 125,000-square-foot warehouse in New Jersey, but the move has taken much longer than Wainwright anticipated. “Our warehouses are crazy full, because it never occurred to me that it would take seven months to negotiate a lease in New Jersey and another three months to get it refurbished.”

Dealing with used inventory can be trying, too. The company’s buyers – 60 percent of whom buy 7 items a year — often become sellers. Its consigners are repeat customers, typically offloading items on RealReal three times a year. But adding inventory – which the company must do each month to keep growing – can be tricky, especially in summer months when many of its consigners are away on vacation.

That’s saying nothing of RealReal’s stiff competition. In addition to other new consignment marketplaces, eBay – which sells between $2 billion and $4 billion in luxury goods each year – looks unprepared to cede much territory. For example, eBay Valet, a service introduced last December, invites users to take a picture of an item. The company then evaluates the item, estimates its value, then sends the user a prepaid box to ship it to eBay.

There isn’t a lot of room for error. As other e-commerce companies like OneKingsLane and Fab have shown, growth can slow suddenly. And while RealReal is growing quickly, it isn’t yet profitable. Despite having raised $43 million from investors, it’s hard to see how RealReal won’t require more money to turn the corner.

Wainwright has navigated tough waters before. Back in 2000, she was brought in to manage Pets.com, a fast-growing pet supply startup that became a poster child for dot com failures when the market went south. Though dealt a difficult hand, she still managed to return investors’ capital.

With her eyes set on profitability in 2015, Wainwright is determined to manage growth before it overwhelms her company. It’s a quality problem. With consigners flooding her warehouses with high-priced goods, she has a closet anyone would envy.