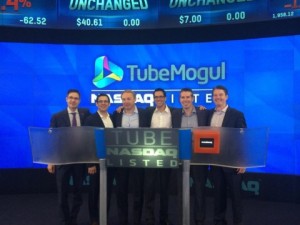 When in 2004, college friends of Michael Berolzheimer asked him to invest in their prepared foods company, the former investment banker wrote them a $200,000 check. When that company was acquired for $122 million in 2007, Berolzheimer plowed his roughly $2 million in proceeds into seed-stage investments. By 2011, he’d decided to formalize his process, raising a $7 million fund from friends and family and naming his San Francisco-based firm Bee Ventures.

Today, Berolzheimer has invested in 32 startups, including the video advertising software company TubeMogul, which goes public today. In fact, Berolzheimer was the company’s first investor. He says he was sold on the team after meeting them in 2007 at UC Berkeley’s Haas School of Business, where he was getting his MBA.

Whether TubeMogul is another home run for Berolzheimer remains to be seen. While he believes the eight-year-old startup “has a long way to go in terms of its growth cycle,” institutional investors seem to think otherwise. At least, yesterday morning, TubeMogul revealed that it was dropping its price range from $11 to $13 per share to between $7 and $8 per share. And Scott Sweet, the founder of IPO Boutique, says that “even with that haircut, I’m not sure we have an ‘up’ deal.”

Sweet doesn’t think the company should be going public right now at all, given that the public market performance of ad tech companies has been poor of late. “If this IPO breaks,” Sweet says, “it’ll further tarnish a niche that needs good news. It would be a lose-lose.”

Berolzheimer acknowledges that today — and the coming months — may prove an uphill battle for TubeMogul. “There’s a chance that it gets misunderstood by investors,” he says.

He’s also quick to note that Bee Partners holds stakes in numerous other promising startups. Tradesy, a consignment site, is among them. Bee Partners wrote the company its first check in 2012; in May, it raised a $13 million Series A round led by Kleiner Perkins Caufield & Byers.

Bee Partners was also the first investor in the aerial robotics platform Skycatch, which raised a $13.2 million Series A round in May that was led by Avalon Ventures and included Google Ventures, ff Ventures, and renowned investor Ram Shriram.

Indiegogo, the global crowdfunding platform, is another of its investments. Bee participated in both the company’s seed and Series A fundings.

I ask Berolzheimer to characterize his firm’s style. “We find opportunities to support the company in any way we can, and if we can’t, we get the heck out of the way.”

He adds, “We’ve had some small wins and a few losses but we’re generally happy with how the portfolio is maturing.” It’s a “starter fund,” he says. “Just like founders, you have to start somewhere.”