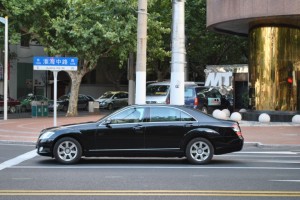 Kuaidi Dache, a two-year-old ride-sharing app and service that’s headquartered in Hangzhou, positions itself as the Uber of China. Now, it just has to outperform Uber itself, which opened an office in Shanghai in February and currently offers its marquee black car service in six major cities — with hiring underway in at least eight others.

At the moment, Kuaidi seems well-positioned to win. The company began life as a free taxi-booking service, and it has since amassed 100 million users who place about six million daily orders to more than one million drivers in 300 cities, says the company.

In July, Kuaidi added a luxury car service that’s now operating in 32 cities to strengthen its challenge. But taking on Uber isn’t for the faint of heart, considering Uber’s funding ($1.5 billion to date), its famously aggressive tactics, and its designs on winning China, where more than 500 million users access the Internet from their phones. Both Uber and Kuaidi are also competing against a third player in China, Didi Taxi, which has raised $117 million so far, including from Tencent Holdings. But Kuaidi’s backers –Alibaba, Matrix Partners China, and New Horizon Fund – have pretty deep pockets of their own, and they are in it to win it, suggests Kuaidi’s cofounder Joe Lee. We talked last week with Lee about the company’s game plan.

You gained traction through a free taxi-hailing app. Now you have a two-month-old car service. How much traction are you seeing, and are these drivers your employees or do they also work for other car services?

We have about 10,000 orders per day, eight weeks after its launch. And we have a combination of both types of drivers. We use licensed cars in China to ensure that we can fulfill the regulatory requirements, so most of the drivers work for us exclusively, but in some new cities, we also work with some part-time drivers.

Are there also eventual plans for an UberX type service, using cheaper vehicles and/or a ride-sharing service like Uber launched in Beijing this past summer, allowing private individuals to pick up passengers?

We’re exploring different opportunities in expanding our fleet. However, the way we look at this business is we have to collaborate with the government authorities to ensure we can move forward without any bumps. As you can imagine in China, to have the business grow in a big way, we have to pay extra attention to the regulatory requirements.

Including a ban on the use of booking apps by cab drivers and private vehicles for hire during rush hour periods in both Beijing and Shanghai, correct?

Yes, during the peak hours, they prefer that drivers not use the app. The key point behind it is safety. The traffic is so jammed that even if you operate on your phone by tapping on it, it’s not safe. So we’re in a very new business, and the law isn’t 100 percent designed to address the new technology, so we’re always talking with all stakeholders.

Uber is known for its hardball tactics, including trying to lure drivers from competitors. Have you bumped up against the company?

For us, it’s a respectable player in the market. In our market, we haven’t seen much of this situation. A lot of drivers are working for us exclusively, so there’s no way to lure them by offering them an extra $2 or $5 per order.

With your car service, are you getting pushback from cab drivers whose business you long helped?

The beauty of our model is that we still work with taxi drivers, so we start off with a good relationship with the taxi industry. We also have a channel with them to talk with them, so we communicate concerns to each other. In our case, when we launched our limo service in China, we received a lot of feedback. Some said it’s a complementary service, some said they have concerns about the safety of our cars and are they licensed – they were fearful of competition. But we haven’t seen any substantial response or feedback.

Uber has always viewed itself as a logistics company, one with plans to enter into many other lines of business. What’s your vision for Kuaidi?

There are many possibilities. With a million drivers and a huge user base that’s specifically using our apps for transportation, we see many opportunities. We have a drink-and-drive service, for example. Along those lines, you could think about car rentals. This market isn’t as established as it is in the States, so we see many ways to leverage our user base.

Kuaidi has announced eventual plans to go after the European and U.S. markets. Why not just focus on China right now?

It’s true that we’ve just started in China, so we first focus on all these low hanging fruits and build a fence to ensure the fruits are protected. At the same time, we are taking small steps forward in our international plan. Our first operation out of mainland China has been launching our taxi service in Hong Kong, where, aside from the language, a lot is different — user behavior, regulations, the taxi industry, interested parties. So we’ll [pace ourselves], that’s the plan.