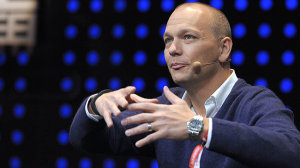 Sitting on stage last week at a San Francisco conference, Greg Duffy, the 28-year-old co-founder and CEO of Dropcam, which makes Internet-connected video cameras, fielded questions from an audience of startup founders. It should have been a time to celebrate. After all, last June, Duffy sold Dropcam to Nest Labs for $555 million. As the panel discussion came to a close, however, Duffy sounded an ominous note. Referring to a longtime colleague who was sharing the stage with him, he told the invite-only crowd that Liz Hamren is “the best VP of marketing in the business.” He then added, laughing, “She’s also my former VP of marketing. You can read from that what you want into my current situation.”

Duffy insists that everything is “great” at Nest, but a cursory look at employee reviews at the jobs site Glassdoor tells a different story. Despite the fact that longtime Apple executive and Nest co-founder and CEO Tony Fadell has received rock star treatment from many journalists (Fast Company dubbed him the “$3.2 Billion Man” for the amount Google paid for Nest this past January; others have wondered if he is the next Steve Jobs), he has received only a 46 percent approval rating across 26 reviews. By contrast, Duffy, who was Dropcam’s CEO until the merger, shows a 100 percent approval rating across six reviews.

Some of these Glassdoor reviews claim that Nest is “killing everything that was special about working at Dropcam” and that “everything we built is being carelessly dismantled after [the] acquisition.” One review states, “Everything revolves around the CEO. It’s a dangerous mix of cult of personality and Stockholm syndrome. Comments like ‘He’s the next Steve Jobs’ are not uncommon, while people proudly say things like ‘I’m used to Tony screaming at me.’ Everyone dreads meetings with Tony because he will flip if he doesn’t like what he sees. Somehow that’s perceived as good leadership.”

Sources who spoke to StrictlyVC and asked to remain anonymous say Fadell has fashioned a hierarchical structure reminiscent of TV’s “Game of Thrones.”

According to one employee, “Almost every decision, no matter how small,” goes through either Fadell or Matt Rogers, who cofounded Nest with Fadell and was previously a senior manager at Apple. (Through a spokesperson, Fadell and Rogers declined to answer questions for this story.)

Another employee calls it a “huge meeting culture, to the point where anyone at the director level or up spends their entire day in meetings, many of them duplicative meetings about the same subject, over and over to the point where a lot of people have complained.”

Coming from Dropcam, which boasted a much more egalitarian culture, a clash seems all but inevitable.

Yet these employees also suggest that the differences between Dropcam and Nest are not just stylistic. One Nest employee says that Nest, which employs between 700 and 800 people, will see roughly double the revenue of Dropcam this year but that Dropcam, which employs 100 people, is growing its revenue eight times as fast, thanks largely to its subscription business.

Many employees were reportedly disappointed to sell to Google because “we were firing on all cylinders, with a sensor product about to be released and an outdoor camera about to come out in 2015 and great sales. It just felt like we’d been chopped off at the knees.”

Says one insider, now at Nest, “There had been rumors earlier in the summer that Google was going to acquire Dropcam, so we had an inkling that something was happening. But when the founders finally called the staff together to announce that we’d been acquired by Nest, there was dead silence in the room. You could have heard a pin drop.”

No wonder Dropcam investor and former board member Mark Siegel sounds less than elated when asked about the company’s sale to Nest. “I think there was a great independent company to be built, and I wasn’t shy about telling that to these guys,” he says of Duffy and his cofounder, Aamir Virani.

Siegel, a longtime managing director at Menlo Ventures, says Dropcam was on a “terrific ramp” when it was acquired. Its Wi-Fi cameras were finally being sold via both Amazon and Apple, and the company was in early negotiations with Best Buy. Morever, “We were about to launch in a bunch more retail locations,” he says.

“There was plenty that had to be built,” he notes. “But it’s very rare that you get the kind of consumer love for a product that you see with Dropcam. Even when we had some bumps in the road – like problems with the contract manufacturer early on—it didn’t affect consumer ratings, because the product was so good.”

“There were some concerns about what it meant to be an independent, small company going up against a Google/Nest,” observes Siegel. “That’s true of any [situation like this]. The real question is, ‘Was [competing directly with Dropcam] Nest’s priority?’ Now, maybe from the inside looking out, you can ask Greg if that was an overblown fear.”

To some of the employees we talked to, Nest’s priority seems to be separating itself from Google, not rolling out new products. At a conference in Dublin, Fadell was asked about the cultural differences between Apple and Google. Painting a picture that sounds like Nest today, he said that from its earliest days, Apple had a “much more hierarchical structure, and the communications structure was very understood,” while at Google, “everyone could just talk to everyone and learn about everything, and there was much more transparency.”

“I’m not saying one is better than the other,” Fadell continued, “but it’s very different. The very first day, when the [Nest] deal was announced, I got all these various individuals from inside Google saying, ‘Oh, congratulations,’ and ‘I want to work with you,’ and ‘Is there something we can help you with?’ And at Apple, it was very structured. It wasn’t like you were going to send a message to Steve [Jobs] for any reason and say congratulations and flood his email box.”

Asked about Dropcam’s merger with Nest after his stage presentation last week, Duffy was quick to describe Dropcam’s integration with Nest as “very positive. Aamir and I spend a lot of time with Tony and Matt” and “there’s a lot of mutual respect.”

Then he made his way toward a clutch of founders who hoped they might catch a few more minutes of his time.