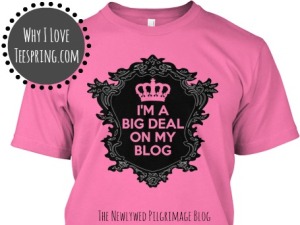 Into ironic T-shirts? You aren’t alone. In fact, the market is so robust that Teespring, a two-year-old company that helps anyone turn their idea for a T-shirt (or hoodie) into a real product, has just raised $35 million in Series B financing from Khosla Ventures. Andreessen Horowitz, which had plugged $20 million into the company earlier this year, also participated in the round.

It seems like an awful lot of money for a simple apparel business, but Providence, R.I.-based Teespring says it has big ambitions to move into numerous verticals. “T-shirts are to Teespring as books were to Amazon,” says the company’s co-founder and CEO, Walker Williams, a Brown University grad who originally started the company to help save a college bar.

Indeed, the general idea is to help anyone with the inclination become an entrepreneur with as little effort as possible.

Here’s how it works today: Users simply download a picture of their design; Teespring handles the rest, from manufacturing to fulfillment to customer service. Teespring outsources some pieces of the process but going forward, it plans to manage more of it internally. For example, it already has its own customer service department; to further support its ambitions, the company is building out a 105,000-square-foot manufacturing facility in Hebron, Kentucky that it says should significantly increase its manufacturing and logistics capabilities.

Teespring is still keeping its revenue close to the vest, but it claims that it has already shipped six million products to more than 80 countries and that 1 in 75 people in the U.S. have purchased a Teespring tee in the past year.

Williams also says that of the “thousands” of vendors and individuals using the service to make their products, “hundreds” of them are “making six figures” and that more than 10 are making in the millions of dollars a year.

On average, he adds, users pay Teespring between $8 and $10 per T-shirt, and between $14 and $18 per hoodie depending on the print design, the fabric, and the number of ink colors the unit requires. (That includes Teespring’s margin.) From there, users can sell the goods for whatever they want.

Today, Teespring employs 170 employees. Once it gets its new facility in Kentucky up and running, says Williams, it will be adding 300 more jobs to the payroll.