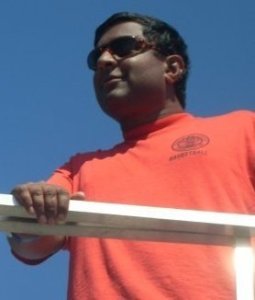 About a year ago, I sat down with Semil Shah, a plugged-in networker who, back then, was working nearly full time at a podcasting company called Swell and spending his spare time participating in some of the hottest seed-stage financings in Silicon Valley.

Today, Shah is no longer at Swell, which was acquired by Apple last July. Instead, the part-time VC, as I’d dubbed him, is moving closer to the life he has long wanted as a full-time investor, with a new fund and roles as a venture advisor at two very different venture firms, GGV Capital and Bullpen Capital. We chatted on Friday about how he’s pulling it off. Our conversation has been edited for length.

Last December, you were investing a $1 million fund. You’d backed 16 companies and you were beginning to think about a $5 million fund. Now I hear that you’re almost there with a second fund.

Yes, I wound up investing that $1 million vehicle pretty evenly across 35 companies. The idea was to get my feet wet and learn all the little things about investing, like what referrals are like and how you decide to invest and how you interact with a company when you want to fund it and how you interact with a company when you don’t. I learned a lot. Raising a million dollars was not easy. Just trying to put $25,000 into companies wasn’t easy. You have to explain a lot [about the value you bring] and you need other people who are investing to support you. The amount of work and reputation required, even to make a small investment, was surprising.

What would you say is the standout of that first fund, and have you had an exits?

The standout is probably [the same-day grocery delivery company] Instacart, which has grown quickly and attracted a lot of attention, though there are a number that are on a great trajectory: DoorDash, Hired, Coin, HashiCorp.

I’ve had a couple of exits in fund one, but the money wasn’t significant enough to distribute, so I’m still holding it. I could technically recycle it versus distribute it, but I’m not sure I’ll have the opportunity to do that. In fund two, my hope is to follow on in one or two companies, but that’s always up to the entrepreneur, not investors.

Are you getting enough ownership in these startups to make this model work?

If you go in early enough, you can have decent size ownership without doing a follow-on. I’m looking at companies before they get to Y Combinator. Part of the reason I enjoy writing so much and being active on Twitter is that I can explain what I’m thinking in real time and people reach out. I’ve had people contact me who don’t know me and introduce me to startups; they’ll just say, I know you like this stuff, and I thought you’d like this company.

You also seem masterful at networking.

Honestly, everything I’ve done has been born out of pain more than opportunity. I’d hoped to invest for a long time but I don’t have the typical background required and there are very few jobs. A couple of my friends [in the industry] kind of pulled me aside a couple of years ago and slapped me and said, You have to stop asking people for a job and figure out how to do it yourself.

Have you been making investments from your newest fund?

I’ve invested in 20 companies so far, including Chain, a block chain company that ended up being funded by Khosla Ventures, and [office cleaning startup] Managed by Q.

Where do you want to be five years from now?

Right now I’m operating on instinct and making decisions in three, four, five days. I put a lot of thought into each investment, but there isn’t much data to go off. As I invest more, I’d like it to be on a path of more concentrated investments.