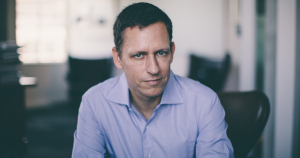 Silicon Valley’s denizens are famously brainy. But many are also perceived as taking themselves too seriously. Peter Thiel, the investor and entrepreneur, has long been relegated to the latter camp, partly because of his controversial views on the merits of dropping out of college, and partly owing to what are often characterized as his extreme libertarian views. But in many appearances that Thiel has made this fall while promoting his new book, “Zero to One,” he has shown another side of himself: talented raconteur.

Yesterday, in conversation with longtime reporter Bambi Francisco at an event co-sponsored by her media company, Thiel – who is among Francisco’s investors – seemed especially at ease, effortlessly making one funny observation after another.

Of party rounds, for example, where startups may raise $1 million from 10 investors, Thiel said he’d guess that they’ve typically underperformed relative to startups that raise capital from fewer investors. “The reality is when you have two [backers], they’ve really thought about it, versus 20 [investors, where] it turns out nobody has.” Pushed back by Francisco on the topic (Thiel has himself written $250,000 checks, she noted), Thiel added, to laughter from the crowd, “I don’t think there’s anything morally wrong with it. People have the right to invest their money. They have the right to invest their money badly.”

Thiel also offered an amusing analogy to explain why people are uncomfortable with the idea of pursuing a monopoly, though he thinks it’s stupid to do otherwise. “If you have a company that’s aiming for monopoly, there’s no one else doing it and you don’t get validation from other people. If you’re doing something that’s really competitive, there are lots of other people doing it and it ends up being validating, though it may be a dumb idea.

“The autobiographical version I always tell is that I was hyper-tracked as a kid. In my eighth-grade junior high school yearbook, one of my friends wrote, ‘I know you’re going to get into Stanford in four years.’ I got into Stanford four years later. I went to Stanford Law School. I got good grades; I ended up at a top New York law firm. From the outside, it was a place that everybody wanted to get in; from the inside, it was a place that everybody wanted to get out. [Audience laughter.] Seven months and three days later [when I was leaving], somebody down the hall from me said, ‘I didn’t realize it was possible to escape from Alcatraz.’ [I said], ‘All you have to do is go out the front door and not come back.’”

Thiel has certainly had plenty of opportunities in recent months to perfect his act, which he acknowledged. Asked about the car service Uber, for example, Thiel noted that as an investor in Uber competitor Lyft, he’s “extremely biased.” He then gleefully added, “I’m on record as saying I think Uber is the most ethically challenged company in Silicon Valley, and I’m willing to repeat that every single time at one of these events.”

Thiel was even charming in recounting missteps along his current book tour, including a September appearance on CNBC, where Thiel said of Twitter: “Twitter is hard to evaluate. They have a lot of potential. It’s a horribly mismanaged company—probably a lot of pot-smoking going on there. But it’s such a solid franchise it may even work with all that.”

Thiel reiterated yesterday that he thinks Twitter could be better run, calling LinkedIn, which enjoys the same valuation, “much better managed.” But Thiel said his televised comment was largely a “pro Twitter comment. The larger context was that if you have a monopoly, you can screw up everything else.”

Media outlets are “always trying to get you to say controversial things,” said Thiel, who says he realized pretty quickly that he’d gone further than intended on CNBC when he saw a beaming executive waiting in the wings.

“As I left the studio, the CEO of CNBC was smiling, and he was like, ‘You did a great job, Peter. We’d love to have you back any time you want to be back here.’ I thought, Wow, have I said too much?”