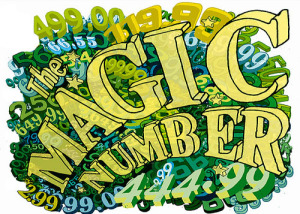 StrictlyVC recently observed that a 10-year-old study has done much to inform how venture capitalists now behave. That data found that between the mid ‘80s and mid 2000s, about 15 tech companies are founded each year that account for 97 percent of all public returns. It was popularized around 2009, when Marc Andreessen and Ben Horowitz – who were launching their venture firm at the time — began discussing it widely with reporters.

Yet the idea that only 15 tech companies each year go on to produce $100 million in revenue and therefore “matter,” has never sounded right to me. It doesn’t square with my own experience, having led Sigma’s investment in three companies that reached more than $100 million in revenue per year: EqualLogic, which sold to Dell for $1.4 billion; Responsys, which went public, then sold to Oracle for $1.6 billion; and oDesk, which recently merged with Elance and remains private. I’m working with several more companies now that I’m confident will reach that very important milestone.

So what? Well, the problem isn’t the belief that a small number of companies generate the lion’s share of venture returns in any given year. That’s been the conventional wisdom for years. The problem arises when this belief is taken the next few steps. In other words: If there are only 15 companies founded each year that matter, then in order to be a good firm you have to be an investor in those 15 companies (or many of them), then therefore (and this is where many firms go off the rails), it doesn’t matter what you pay for them.

Overlooked in this march toward the “winner’s circle” is the time required to build a company to $100 million in revenue. It took EqualLogic roughly 6 years, Responsys roughly 12 years, and oDesk a decade. The aforementioned research covered a span of time through the mid 2000s. All of my $100 million companies were founded in those cohort years but reached the magical $100 million mark in more recent years, meaning they wouldn’t have been in that 15-per-companies-per-year estimate.

To believe that such a narrow number of companies is all that matters doesn’t make intuitive sense, either. According to Morgan Stanley, there were more than 20 venture-backed tech IPOs each year between 2001 and 2014. It’s safe to assume the vast majority of those companies mattered to their investors. The same is surely true of the countless great M&A transactions we’ve seen over the same period, like WhatsApp, Nicira, Instagram, and YouTube.

Worth noting: None of the aforementioned M&A deals got to $100 million in revenue on their own.

This brings me to another point. While it’s true that venture investing follows a power law — meaning that a small percentage of companies each year represent the overwhelming percentage of gains from that year — you can still generate fantastic returns without being in those monster hits.

Even if you take out the “15”, there will still be many 10x exits that are just making up for the companies that lost everything for that vintage year. And any venture investor would be happy to invest in a 10x company whether or not it was among those that generated the bulk of the returns in venture for its vintage.

The biggest problem in investors’ religious adherence to the 15/$100 million meme is that it causes bad behavior. When every investor is chasing that mythical yearly batch of 15 companies, the resulting competition causes valuations for those anointed companies to skyrocket. That’s bad for investors who often end up investing at valuations greater than the public market is willing to give these companies (see Groupon, Zynga, et al.). It’s also bad for companies. Those for which capital is cheap and easily accessed are at greater risk of making non-economical business decisions that create business models that rely on increasing amounts of cheap capital (see Fab, Box.net, et al).

Bill Gurley put it best when he told the WSJ: “Excessive amounts of capital lead to a lower average fitness because fitness, from a business standpoint, has to be cash-flow profitability or the ability to generate cash flow. That’s the essence of equity value . . . [and] we get further and further away from that in the headiest of times.”

At some point someone will do the definitive piece of academic research on the topic. Unfortunately, given the long time required to scale most companies to $100 million in revenue, the mature cohorts will be so far out of date that they won’t be relevant to the then-current investing climate.

Greg Gretsch is a managing director at Sigma West.  Follow him @greggretsch