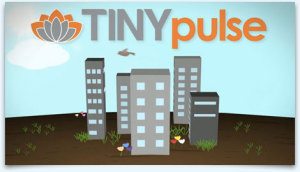 There it is, in your Twitter feed. Another acquaintance reporting “some personal news” that you learn in subsequent tweets is a new job.

It’s not just your friends who are bounding from role to role. According to the Labor Department, 5.1 million people began a new job in October, the highest hiring level recorded since 2007.

The shift is great for employees, for whom it’s become easier to escape lousy managers. It’s also giving rise to numerous new startups whose “pulse surveys” — – frequent, anonymous employee polls — are helping bosses understand who is happy, who isn’t, and what they can do about it.

Yesterday, we talked about the trend with David Niu, the founder of TinyPulse, a two-year-old, 20-person, Seattle-based startup that says 500 customers are using its app already, including Microsoft and GlaxoSmithKline. Our chat has been edited for length.

You’re a serial entrepreneur who sold your first company, NetConversions, to aQuantive in 2004. You also cofounded the mobile TV guide app BuddyTV, which remains privately held. Why start TinyPulse?

I was getting a little burned out at work a few years ago, and after getting married and having a baby daughter, I convinced my wife to sell most of what we own, put the rest in storage, and buy one-way tickets to New Zealand with our then two-month-old. I needed to recharge. I also wanted to better understand how founders burn out at their own companies. So after six months, I started interviewing entrepreneurs and CEOs — including outside of tech — to ask what their biggest pain point is. Almost everyone named [employee retention] and the fear that once one employee goes, there could be a stampede for the exits.

I thought: if we flip annual employee satisfaction surveys on their head — make them bite-size and easy for employees to fill out frequently, managers can make small, incremental changes that make a difference.

How often are these polls typically administered, and how much do your customers pay for them?

We charge $3 per employee per month. Most clients use them weekly or every other week, though employees can use a “cheers for peers” feature as often as they like. They can also submit virtual suggestions any time.

Are they prompting real change at organizations? What are some of the stories you’ve heard?

At one startup, the CEO received feedback that one microwave isn’t enough for 200 people. He was like, “I get it, people. Why did it take TinyPulse for you to tell me?” Meanwhile, another customer, Hubspot, had let go of a few people for performance and fit and people were getting antsy, which the [department head] was able to capture via TinyPulse. So he held an all-hands with the sales and marketing team. He told them, “We love you guys. Your job isn’t in danger. We aren’t in a risky financial situation. Let me explain what happened.”

It was a little pothole, but it could have become a crater. People bring fear and uncertainty home with them, and they look at other opportunities.

Can you predict if a stock will go up or down based on TinyPulse ratings?

It’s been proven that companies that are considered good places to work and that take care of their employees outperform their peers, especially in down years. In good and bad markets, smart companies realize that if their employees aren’t happy, they aren’t as engaged. A good culture is the ultimate competitive advantage.

There are a handful of other startups in your market, including15Five, Niko Niko and BlackbookHR. Which is your strongest competitor?

It’s usually nothing — we’re competing with inertia — or Survey Monkey, which is free and easy to use but is a broad-based survey tool. We’re solely focused on helping customers create a happier, more engaged workforce.

You’ve bootstrapped the business so far. What’s on your road map, and will you look to raise money from investors?

We plan to launch other offerings. Fans of TinyPulse sometimes ask: Do you do onboarding, exit surveys, time clocks? We think that anything that makes employee engagement easier is possible. As for funding, there’s always a time and place for it, but right now, any minute I spend on fundraising is time not spent on the core business.

We are humbled that a lot of VCs contact us, often because they see our data in board decks [of their portfolio companies]. They’re like, “What’s TinyPulse?”