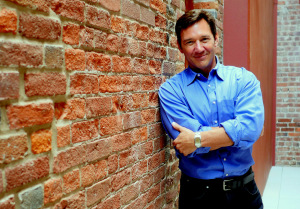 Todd Chaffee has spent the last fourteen years as a managing director at Institutional Venture Partners, a Sand Hill firm that has evolved into a powerful late-stage investor over that period. (It celebrated its 101th IPO last month when the small business lender OnDeck went public.)

Given the market zigs and zags that he has witnessed, we asked Chaffee — famous for his investments in Twitter and HomeAway – to share what he’s seeing in the late-stage market right now. We chatted yesterday in a conversation that has been edited for length.

They’re high. They’re extraordinarily high. At the same time, the companies we’re seeing are more interesting, with more attractive business models and stronger and faster revenue growth than we’ve seen before. So it’s a little like, prices are high, but these are amazing companies. It’s a bit of a high-wire act.

We’re very selective. We see several thousand deals a year, evaluate several hundred, and last year we made 14 investments. It’s a funny time because prices are so high, but these companies are so cool. When you have great management, a big market, and numbers [moving] up and to the right, you have to pay a high price.

IVP hasn’t backed one of the most highly valued private companies in the U.S.: Uber. Why?

Uber is in our “anti portfolio.” It’s a phenomenal company, with probably more potential than any other private company that’s out there right now. It could be Googlesque.

Why not jump into one of its many, ongoing rounds then? Is it too richly priced at this point?

We don’t have current numbers, but I know it’s beating its numbers all the time. . . That said, its valuation is way, way ahead of the fundamentals in every round. We usually don’t have to stretch too far; we don’t have to pay crazy prices to access top companies.

Would you make another bet on this trend of people driving less?

I think Uber wins this and will be the dominant player with the largest market share by a long shot. You can be the number two or three player, but it’s tough. Generally, we’ve found that if you back the market leader, it will drive the greater returns.

What about the so-called connected home? It’s all anyone can talk about this week because of CES.

We invested in Dropcam [acquired last summer by Nest Labs] and we were looking at Nest before Google acquired it [a year ago]. Those were the best two companies in that space as far as we could tell.

I do think there’s opportunity there, but I also think [the connected home is] part of the hype cycle and that we haven’t reached the “trough of disillusionment” yet. We’re still in the “this is going to be amazing” phase.

You came to IVP long ago from American Express and Visa. What do you make of today’s payment technologies?

Payments are a funny thing. They migrate very slowly. We’ve been using paper and coins for thousands of years. Also, the thing about payments systems that people forget is that it isn’t a technology problem; it’s a system of guarantees. That’s what makes a payment system work – not whether the wireless NFC [reader] or the magnetic strip on the credit card will work.

How do you feel about Bitcoin?

I don’t know what to make of Bitcoin. I’ve looked at it. I saw the wave of payment systems back in the [dot com] era: CyberCash and DigiCash and all those players and passed on them, which was the right thing to do. Bitcoin seems to have more momentum. I’m just not sure. The payment system works pretty well right now.

What interests you more?

I’m very interested in security companies right now. There are huge issues underway. There are fires in the building – right now – in enterprise.

We think the media world is fascinating, with big incumbent players just kind of losing it while companies like Vice and Buzzfeed and Business Insider – one of our portfolio companies – are showing up and saying, “We know how to work mobile and social.”

IVP has backed Snapchat and Dropbox, which are riding that trend. What about startups that are turning smartphones into remote controls for the physical world. Are you interested in delivery service startups, for example?

Not many have broken out and gotten to our stage yet in terms of scale. Also, when you have a physical aspect [to your business], you have to watch the margins. They get tough. If you’re going to deliver things, the operational intensity is high. Just because you can do something doesn’t mean you should do it.

Did you look at the grocery delivery company Instacart, which just raised $220 million at a $2 billion valuation?

We did. I know Instacart has a great team and great model and attracted some marquee investors at a staggering valuation. The jury is still out.

Instacart’s newest round was led by Kleiner Perkins, but many deals now involve public market investors who’ve moved into private market investing. How are you getting on with them?

It’s good when they pay a higher price than we do. It’s troubling when they become undisciplined. Most are pretty good. We’re not seeing too many drunken sailors yet. I’ve been doing this for 20 years, though, and you always get one or two [firms] that you’re like, What are those guys doing?