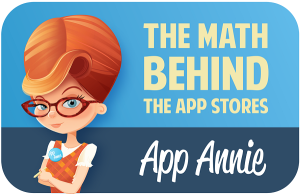 According to Comscore, activity on smartphones and tablets now absorbs 60 percent of our digital media time, driven predominately by apps. Yet, for the most part, anyone hungry to know how — and how often — those apps are used has been left in the dark.

Onavo, an app analytics company, was widely seen as providing better insights into app usage than most analytics startups. But when it was acquired by Facebook last year, its insights were moved behind a curtain.

Now, App Annie, the five-year-old, San Francisco-based mobile analytics company, says it has developed everything Onavo featured and much more.

Onavo’s mobile measurement product evolved out of a couple of applications designed to do something very different – help users reduce their expensive data consumption. Once the company gathered enough user data, it shifted gears, turning itself into a market intelligence product.

Similarly, App Annie is rolling out a tool today called Usage Intelligence that provides customers with detailed analytics about individual app usage and engagement – information that largely comes from its free, five-month-old VPN Defender app, which offers encrypted and secure access to a user’s favorite sites and apps.

The development is a big deal for app developers and investors who’ve been unable to accurately gauge how apps fare on the open market, as well as how people use them after they’ve been downloaded.

It’s a huge boon, too, for App Annie, which makes money by selling yearly contracts for its analytics and says its broader tool sets are already being used by most top mobile app developers, giving it insights into 675,000 apps as a result.

The company — whose average contract is $80,000 per year — isn’t yet profitable, says cofounder and CEO Bertrand Schmitt. “I’d be sad if we were,” he says. “It would mean we don’t know where to invest next.”

App Annie is clearly an IPO candidate, though. In fact, the 300-person company has just raised $55 million in Series D funding led by Institutional Venture Partners, a late-stage investment firm that just saw its 101st portfolio company go public in December. “Among the reasons we chose to work with IVP was their extensive experience with IPOs,” says Schmitt, who says an offering isn’t in the cards for 2015 but suggests it’s not too far off either.

In the meantime, App Annie — which has now raised $94 million altogether — remains focused on growing its business as fast and as wide as possible. The company already has 10 offices around the world. And it expects its headcount to reach 450 by year end as it pursues several new markets more aggressively, including India and South America.

Schmitt says App Annie intends to create more of a social network around the business that makes it easier for developers to share and collaborate on App Annie.

Unsurprisingly, the company also plans to release many more apps like VPN Defender from which it can continue to wring valuable and lucrative insights for its customers — and break further away from competitors in the process.

“If we keep improving as we have done, how do you fight?” says Schmitt. “There’s no other company with the same ability to execute.”