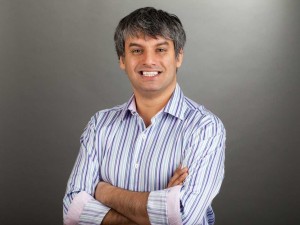 In recent years, there’s been no shortage of chatter about seed funding, from the alleged benefits of seed rounds to their ballooning size. (Clinkle, anyone?)

Distelli, a two-year-old infrastructure automation company that simplifies code deployment and server management for developers, decided to skip past it all to raise $2.8 million in Series A funding led by Andreessen Horowitz, a round that sees general partner Scott Weiss joining Distelli’s board.

The decision makes sense given the broader context. Distelli was founded by Rahul Singh, the fourth engineer on the Amazon Web Services team. He spent nine years building the platform services and infrastructure that powers the cloud computing platform, and he’s accustomed to finding ways to move things forward as quickly as possible.

In fact, Singh — who says Amazon’s developers push out new code every 11 seconds – not only credits Amazon’s growth with its own “move fast” culture, but he says Amazon inspired him to make it easy for any developer to iterate just as quickly. Toward that end, Distelli enables engineers to communicate with every server in their environment to learn what’s running on each of them, as well as update their code or roll it back, and track every change in the process.

It isn’t a brand-new concept. Distelli, which is based in Seattle and employs six people (including two other former Amazon engineers), is going up against a number of competitors. Among them are Chef, a company that allows its users to automate how they build, deploy, and manage their infrastructure, and Puppet Labs, which also develops IT automation software. Both have raised many tens of millions of dollars in venture capital, too.

Singh argues that Distelli has a much bigger vision than other startups and that Distelli’s biggest competition at the moment are the many software teams still building their own infrastructure automation systems internally.

Still, says Singh, it was important to have someone like Weiss – who cofounded the email security company IronPort Systems back in 2001 – in Distelli’s camp as soon as possible.

Indeed, skipping over seed funding had “little to do with equity and valuation,” he explains. “The real significance of doing an A round was that angel rounds often don’t include board seats and I want a great partner to execute because the opportunity is so huge.”

As for the size of the round, which is modest by recent standards, Singh observes that “just as raising too little can be a problem, raising too much can be a problem, too. I wanted to ensure we raised enough money to reach our next set of goals and to achieve what we want in the next 18 months — without getting complacent.”