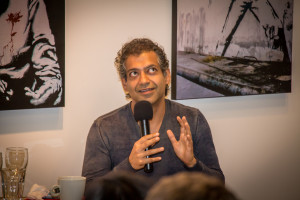 Last week, at StrictlyVC’s inaugural event, investor and founder Naval Ravikant joked about the trials and tribulations of entrepreneurship. He also gave those gathered a comprehensive look at the near-term future of AngelList, his fast-moving, 22-person, San Francisco-based company that’s perhaps become best-known for its pop-up venture funds called Syndicates that allow angel investors to syndicate investments themselves. Indeed, according to Ravikant, more than 243 companies raised $104 million through the platform last year, making AngelList the “largest seed fund in the world.” And AngelList is hoping to double or triple those numbers this year.

No. In the entire history of AngelList, we’ve never had a single related case of fraud or a lawsuit threat. We follow the rules, we have a no-action letter from the SEC, we have disclaimers, we’re trying to deal only with sophisticated people. This is America, and anyone can sue you and someone eventually will. But so far so good.

You talk a lot about the advantage of moving investing online.

People like to think that it doesn’t create that much value, but we forget that when you move online, there are all kinds of things you cannot do offline. An example: By the end of this year, you’ll be able to go into Syndicates and say, “This person sourced the deal for me so I’m going to give this person carry. This is passive capital, so they’ll pay full freight. The pro rata will get gobbled up by following entities.” You can even start doing differential pricing. You can establish that the first $250,000 into a deal gets a 20 percent discount and the next $250,000 gets a 15 percent discount. It breaks that logjam of: Why should I be the first one to write a check into the company.

Online would also seem to play into this notion of continuous fundraising or rolling closes. Do you think that’s a sustainable trend?

We’re going to see a lot more of it. Companies are getting much better at raising money whenever it’s available and they’ll raise it in dribs and drabs until they get to the scale or product-market fit where a VC will come in and write a $10 million check. I think it’s a natural trend and I do think it’s easier online than offline. We already enable it to an extent in that Syndicated deals can stay open for months and keep collecting capital if you want it to . . . My guess is that by the end of next year, it’ll be a common thing.

In the past, entrepreneurs had gotten a lot of advice from the venture side, which was kind of talking their own book, which was, “Get your ducks in a row and raise money once and get a good board member.” It’s all good advice, but it’s a little self-serving, whereas accelerators give almost the opposite advice, which is: “Go get the money right now, get it from anyone who will write you a check within reason, and keep taking money as long as you can and just don’t run out of cash.”

I’ve also seen you mention getting into secondaries. How serious were you?

Yes, they’re becoming very popular now because household names like Uber and Airbnb and Dropbox are staying private longer and people are running around trading in the companies’ stock on the side. But it’s very tricky because [secondaries are] regulated in a very different way. Insider trading laws apply to secondaries; the companies often don’t want there to be secondary trades, so they have a right of first refusal. A lot of the secondary trades that are going on are in violation of the companies’ bylaws. A lot of them have counterparty risk, where you don’t actually run it through the company; you just get an IOU from someone who could skip town.

A lot of this going on right now. It’s possible that the amount of secondary trading going on in Silicon Valley under the covers is going to match the amount of primary financing soon. And if you look at the public markets like the Nasdaq or the NYSE, it’s almost all secondary. The IPOs are a tiny piece of the trades, and then it’s all secondary trading going back and forth. So it’s something that we’re looking at, but it’s very difficult, and because we’re so large and so watched, we have to do it by the book. We’re looking into it, but it’s a hard problem.

[Update: The original version of this story was titled: “In Silicon Valley, Secondary Deals Quietly Reaching ‘Primary’ Funding Levels.” Ravikant asked that we change it, given that our choice in wording was more predictive and certain than his original comments or intent. Our apologies to Ravikant and to readers.]