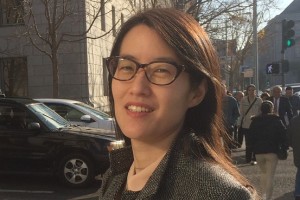 Yesterday, in Ellen Pao’s first appearance on the stand in her gender discrimination case Kleiner Perkins Caufield & Byers, where she once worked as a junior partner, she testified that filing suit against the firm was the culmination of many discussions with various of the firm’s senior executives over a five-year period during which she flagged issues of harassment and gender discrimination and beseeched them to change the “loosey-goosey way we dealt with issues.”

Wearing a simple, caramel-colored dress and purple blazer, Pao spoke of attempts to encourage at least four senior Kleiner executives to institute HR policies around discrimination and harassment following her affair in 2006 with her then senior colleague Ajit Nazre, who she says was “relentless” in his pursuit of her and pressured her into what would become “rocky” six-month-long relationship.

After Pao ended the affair, said Pao, Nazre began cutting her out of email chains and excluding her from meetings. For help, she turned to then general partner Ray Lane, who was Nazre’s mentor; Lane twice suggested the two have a conciliatory lunch. (Pao says she conceded, but left mid- meal after Nazre professed his love for her.) She also reached out to general partner Randy Komisar, who told her he “didn’t want to know.”

Pao also later told general partner John Doerr about her brief relationship with Nazre. Doerr was prepared to fire Nazre over the incident, said Pao, who added that she and Lane successfully worked together to preserve Nazre’s job at the time. But subsequent conversations with Doerr, Lane, and general partner Ted Schlein about the need for Kleiner to institute better policies to deal with such situations and prevent future problems were repeatedly ignored, she testified.

Pao, a Harvard-educated attorney who spent two years as an associate at Cravath, Swaine & Moore early in her career, also testified that she told Juliet de Baubigny, the firm’s head of human resources, that she felt Kleiner needed a related HR policy — particularly as Pao suspected Nazre of sexually harassing three administrative assistants. In response, de Baubigny told Pao she thought Nazre was a “sex addict,” recalled Pao of that exchange, who said yesterday that she was “surprised” by de Baubigny’s characterization. “I thought [de Baubigny] must have additional information about the administrative assistants.”

On the stand, Pao came across as likable, including smiling on occasion as she addressed questions by her attorney, Theresa Lawless. It was an image very much at odds with the picture of Pao that Kleiner’s attorneys have sought to create as someone with “sharp elbows.”

She also seemed highly competent. Indeed, at the direction of Lawless, Pao spoke at length about the many accolades bestowed on her by Doerr during their working relationship, as well about her investing instincts. She testified yesterday, for example, that she tried convincing Kleiner to invest much earlier on in Twitter, and that her case for the company went unheeded because, according to general partner Matt Murphy, who’d previously met with Twitter, its team wasn’t business-minded. (Kleiner eventually invested in Twitter in late 2010, at a $4 billion valuation.)

Pao also testified that she convinced the partnership to back RPX, a patent technology startup that Kleiner would not have funded without her due diligence. (It would eventually go public in 2011, an otherwise terrible time for tech stocks.) She added that Doerr gave the company’s board seat to Komisar because Pao was pregnant with her daughter and as such, “I wasn’t being considered for a board seat or board observer role.”

She also said that upon her return from maternity leave, she had “many” discussions with Komisar about RPX. Said Pao, “[H]e was not involved with the company, and the [RPX] team had started to complain about him. Every time I heard a complaint, I would raise it with Randy. I wanted to try to help solve the problem.”

Unsurprisingly, Pao spent much of the day describing a very male-dominated culture at Kleiner. Pao was asked, for example, about that now infamous all-male dinner at former Vice President Al Gore’s apartment at the St. Regis hotel in San Francisco, where Pao also had an apartment at the time.

“It was pretty humiliating,” said Pao of seeing entrepreneurs in the building who were on their way up to the dinner. One of them was Mike McCue, the CEO and cofounder of the news aggregation app Flipboard, on whose board Pao sat at the time. “I was coming down the elevator and ran into people in the lobby . . . When I went outside I saw Mike McCue [parking] . . . and he said ‘OK I’ll see you up there,’ and I said ‘No, no, I’m not going to be part of this dinner.'”

Pao also described wanting to leave the firm in 2007 owing to the company’s culture. Following conversations with the firm’s senior partners about it, and asked by Doerr to elaborate, Pao wrote him — in email shown to the courtroom — the she’d like to see “less fear in making unpopular statements. Less risk around offending others.” She also pointed to “politics,” suggesting she’d like to see “consensus building in a way that shares information and contributes to an open process.”

Not last, Pao told Doerr she thought the partnership needed to show greater respect to entrepreneurs, regardless of whether or not the firm was interested in funding their companies.

Said Pao, “I’d seen some meetings where we were late and would make entrepreneurs late. There was [another] meeting in particular where we weren’t interested in talking about [the] specific venture and we started talking about taking some people from [the company that was in the pitch meeting] and [hiring them into another startup]. And when you’re talking about breaking up a [company in front of its founders], that just seemed very disrespectful to me.”

Pao has yet to be cross-examined by Kleiner’s legal team. She returns to the courtroom today.

Photo of Ellen Pao outside a San Francisco courthouse by Jeff Elder of the Wall Street Journal.