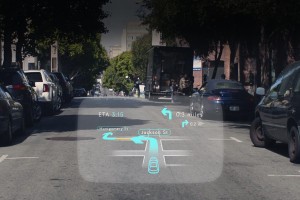 Navdy, a 20-person, San Francisco-based company, has spent the last two years working on a head-up display that can be installed on the dashboard of any car and aims to make driving safer by getting people to look ahead at the road, rather than down at their phones.

Its vision is about to be fulfilled, too. After taking more than 17,000 pre-orders for the product on its site, amounting to more than $6 million in sales, the company says it’s ready to start shipping the first version of the Navdy to customers in the second half of this year. (Pre-orders cost $299; the device will retail for $499.) In fact, investors are so excited about the company’s future that they’ve just given the company $20 million in Series A funding.

Earlier this week, we spoke with Navdy founder and CEO Doug Simpson to learn more. Our chat has been edited for length.

You’ve sold a lot of a product that hasn’t shipped yet. Did we miss your Kickstarter campaign, or did Navdy do this exclusively through its site?

It was all done on our own site. We wanted to have more control over the user experience, and we have a [fun, product demonstration] video that’s done well, with more than 1.4 million views – that’s a big success factor. It’s a problem that people can identify with, and it’s an experience that feels magical, and I think that came across in the video and people got excited about it.

How will big will the product run be, and did you always intend to begin shipping in the second half of this year?

It was not always the plan. We were targeting the first half the year, but the preorder campaign was way more successful than we thought it would be, which made things more difficult, including [regarding] the supply chain. We’ve also continued to [integrate feedback] from a lot of usability testing and made iterations that have taken longer than we expected, but the result is that we’ve made some great improvements in the product. It was a difficult decision to disappoint people with a delay, but it would be worst to disappoint them with the product itself.

As for production capacity, it will take less than a month to get through the orders we have now; after that, we’ll be producing between 20,000 to 30,000 units per month.

And where will they sell?

From a channel perspective, we’ll be able to take orders online this year, and next year, we’ll roll out to other channels, including traditional consumer retailers like Best Buy. We don’t have anything to announce, but the number of retailers and distributors who’ve [reached out out to us] is over 2,000.

You’ve probably gotten a lot of feedback regarding which apps people want Navdy to include and those they don’t. Have you made any big changes based on that feedback?

Not really. Our original plan was to focus on three use case: navigation; communication – meaning call control and text messages; and music control, and the feedback we’ve had is that those are the categories that are important to customers. Music control is a lower priority than the first two, so that’s helped us prioritize our development efforts.

The obvious concern with Navdy is that it will be rendered obsolete by newer cars that have this kind of technology baked in.

One of the surprises of the pre-order campaign is that lots of OEMS have already started contacting us about partnering. That’s always been our strategy, though we thought it would take time to get their interest. It will be a long process, but either way, we always plan to offer a direct-to-consumer product, too.

What proof you have that your product will make driving safer?

As part of user testing, we’ve taken a look at cognitive upload, the distraction of interacting with our product versus the phone. We’re also working with insurance companies and car companies on some of those aspects as well. There’s a lot of evidence to support that head-up display technology itself — developed by the military and used now by all commercial airlines – is safer.

What’s next? Is there a product line in the pipeline?

Yes, we really want to focus on making the in-car experience great, and we think we can expand beyond just this initial product, but right now, we’re very focused on [the first version] and the second version will build on that. I can’t really share more than that right now, though.