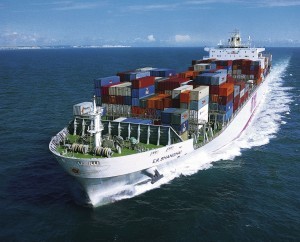 Its story attracted Horizon Ventures of Hong Kong to its door. (Horizon just led a $10.8 million strategic investment in the company, with participation from Windward’s early backer, Aleph). Windward also counts a dozen governments around the world as customers. After poring over some of Windward’s findings about ship behavior, we also found ourselves wanting to learn more.

Luckily, we were able to catch Windward’s cofounder and CEO, Ami Daniel, as he bounded around New York City yesterday, trying to strike new partnerships. Our chat, edited for length, follows.

You were a navy officer for six years before starting Windward. Did you start thinking about the company during that period?

I was entrepreneurial as a teenager, and when I left the Navy, I hooked up with [Windward cofounder] Mantan [Peled], who I’d served with for five or six years. We wanted to do something big, and we felt that oceans were the Wild West. More than 90 percent of the world’s trade is carried by sea [according to the International Maritime Organization, or IMO], yet the shipping ecosystem is much more opaque than most people realize.

Talk to a big commodity trader, for example – someone who buys and sells more than $100 million in oil every year. His secret sauce is his connections, like port agents who know who is entering or leaving the ports, or the mine manager who knows when cargo is rolling out to market, or the contact in Nigeria who knows how to buy [low and sell high]. It’s an industry that’s based on 200-year-old methods. It’s all very gray. It’s kind of like real-estate in New York. [Laughs.]

You claim Windward has a better picture than anyone of everything that’s happening. How does your tech work?

We start by checking whether you are who you say you are and creating a record of what you’ve been doing. We also calculate what you say you’re transporting by gauging, for example, how long you’re in the jetty, and how long it’s taking you to load what you’re carrying compared with the average loading rate for the same cargo. We don’t necessarily trust you to tell us how much oil you’re carrying. There’s a lot of [subterfuge in shipping]. For example, ships only report their final destination 41 percent of the time, and 55 percent of ships misrepresent their port of call for most of their voyage.

Aren’t there mandates against doing such things?

The IMO is responsible for maritime data and there are mandates issued by the UN, which is the regulator. But there is no punishment for not complying. You can steal an identity. You can turn off your data transmissions. I personally approached the head of the IMO to give him an executive summary of our findings and to ask for the organization’s feedback and they never called us back.

And you collect all this information how? Through satellites? Sensors?

It starts with public information, then we get commercially available information. Spire, for example, is a San Francisco-based company that tracks ship transmissions and weather and sells information to companies like us. Beyond our data partnerships, we go to port agents and logistics brokers and we say, “We’ll give you technology [in exchange for information].”

Everyone has a small segment of the picture. There are no magic solutions, no one vendor, no one protocol. Everybody’s stories are different, so it’s very time- and resource-intensive work. But one of the moats we’re building is one of the biggest databases ever.

But you have competitors.

We do have competitors, including IHS [a company that sells information and analytics about the maritime industry to customers]. But what we’re doing is better. Others take this older approach of information services, with analysts looking at databases and writing reports and then selling a giant report to everybody. We’re taking a data science approach, using Hadoop and Apache Spark to compute and slice and dice things automatically according to different queries.

You have a dozen governments paying you to subscribe to this platform. Can you give us some idea of what they’re paying you?

We’re happy that we’re being paid for the value that we’re providing, which is high, but I can’t be more specific except to say that we’re seen three times revenue growth year over year for the last three years and we’re making enough that we’ve barely touched the [$5 million Series A round we closed in 2013 from Aleph].

Like another intelligence specialist, Palantir Technologies, Windward started with government customers but wants to begin targeting financial clients. Have you lined up any firms so far?

We’re in beta testing. No one is paying yet. But we’re not cash strapped. We can afford to engage with customers as we develop the product. We want to make a billion dollar company out of this  That’s why I’m in New York, meeting with hedge funds and commodity traders. Legwork!