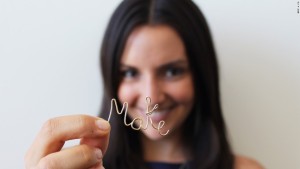 It’s looking like Udemy, an online educational marketplace taught by experts who are not university professors, may be as apt a comparison.

Indeed, fueled with $20 million in new Series B funding – from Intel Capital, Liberty Media, and retail veteran Ron Johnson, among others — the company is now planning to shower almost as much effort on educating visitors as it does on entertaining them. We caught up with founder (and former Googler) Brit Morin yesterday to learn more about the company’s evolution. Our chat has been edited for length.

For more than three years, we’ve really focused on building out the media arm for a couple of reasons. First, we wanted to do one thing at a time. We also really wanted to build the foundation of the brand and understand from our audience what type of commerce they’d want from us. Although women were into it from an aspirational and inspiration standpoint, they said, ‘I have no idea how to do this,’ and it opened our eyes. So we launched into online education last year and we’ve since sold 15,000 classes and kits [required as part of the classes].

How many classes versus kits is that?

We don’t break that out but we have 15 different classes right now, and we’ll have more like 60 to 70 by year end. Our community of makers are the ones teaching the classes. [Editor’s note: classes range from 20 minutes to 60 minutes in length and from $9.99 to $19.99 in price, not including the required kits.]

How big is the media side of the company at this point?

On the media side, we now have 12 million visitors every month. We have roughly 100 advertisers, with a 74 percent retention rate. And we’re doing millions in revenue, 99 percent of which is native advertising, meaning our content and videos somehow include the products of our sponsors, though our readers know it’s advertising. We’ll partner with Starbucks for example, and teach you how to make your own coffee ice cream.

You also just acquired Snapguide, a free iOS app that lets users create and share step-by-step guides. Snapguide had raised $10 million from investors. Are you breaking out how much you paid? As important, what drove the deal?

We aren’t disclosing price, but there are a number of cool things about Snapguide, including [the ways it helps a third aspect of the business, a year-old, Etsy-like marketplace where people can sell their homemade goods]. If you [as a participant of that marketplace] are creating your own step-by-step guide, you can use a photo or a video or a hybrid [thanks to Snapguide].

You recently raised $20 million from investors, bringing your total funding to $27.6 million. Will you be in the market again any time soon?

The way I approach is it: it’s great to be in a position where you don’t have to raise money, but we’re very opportunistic whether it be a great investor or [something else that provides] great option value for the company. We’re not opposed to raising money earlier.