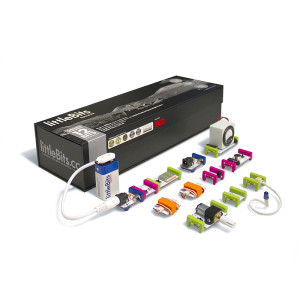 If you work in tech and have or know young children, you’ve likely heard of LittleBits, a 3.5-year-old, venture-backed maker of electronic components that are sold via kits and snap together to create everything from toy robots to synthesizers and more.

Today, the New York company is getting serious about ensuring its modular pieces make their way into the hands of many more people. Toward that end, it’s announcing $44.2 million in Series B funding led by DFJ Growth, with participation from Morgan Stanley, Alternative Investment Partners, Grishin Robotics and Wamda Capital. (Foundry Group, True Ventures, VegasTechFund, Two Sigma Ventures, and Khosla Ventures  — earlier investors that had provided the company with $15.6 million in previous funding — also joined the round.)

Educators, who have been discovering LittleBits, are about to become one big area of focus for the 90-person, New York-based company. Already, LittleBits are being used in 2,100 schools in 70 countries, says LittleBits’s founder and CEO, Ayah Bdeir, who says that while LittleBits has a “good footprint” in California particularly, the company is looking to add to that momentum nationally and internationally by adding employees in sales and distribution.

LittleBits is also going after more corporate customers. Indeed, according to Bdeir, companies like Salesforce, Twilio, and SAP have — in the last year, entirely on their own — begun employing LittleBits in creativity workshops and in the prototyping of their various products, including those centered on the Internet of Things. (Part of the attraction: Last year, LittleBits introduced a “cloudBit” device that allows users to add a variety of things to their connected home via LittleBits hardware and a companion app. It has since introduced many other related modules that make it easier to play around with popular connected devices as well as invent new ones.)

Of course, parents and others interested in providing children with an easy way to understand electronics also remain a big target for the company, which currently sells its products through its own site and Amazon, but plans to slowly grow its number of retailing partners starting with Barnes & Noble, which will begin selling LittleBits kits later this year.

As for sales to date, the company isn’t disclosing numbers but says it has been growing “three to four times revenue” annually and that it has sold “millions of units” (meaning pieces, not kits) in more than 100 countries.

It also says a subscription model may be on the horizon. “People have been asking for it a lot,” says Bdeir. “It’s something we want to develop.”

(For more on LittleBits and its newest funding, you can check out our TechCrunch piece here.)