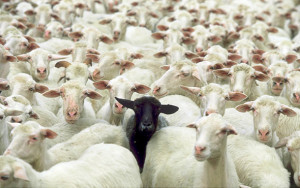 The Venture Capital industry is stuck in yesteryear – the same people, living the same lives and having the same experiences making largely the same decisions. This sameness may have been a strength but is now creating blind spots. For every idea we fund, how many great ideas don’t even get a sounding board because we can’t relate to the problem or the entrepreneur? How much better off would we be if we had a larger lens from which to take bets on a broader class of entrepreneurs and ideas? My suspicion is greatly.

So begins an op-ed by venture capitalist Chamath Palihapitiya about some research that his firm, Social + Capital, has just produced in concert with The Information on the state of diversity in venture capital.

You may think the results can’t possibly surprise you, given venture capital’s stubbornly persistent reputation as a bastion of largely white, privileged men who’ve attended top universities and gone on to land plum operating assignments or start their own venture-backed companies on their path to becoming VCs.

According to the organizations’ conclusions, fully 92 percent of senior investment team members at top venture firms are men, and 78 percent of them are white. More shockingly, fully 21 of the 71 most active U.S. venture firms – that’s 30 percent — employ only white “leaders,” as they’re called in the study.

Even compared with tech giants — many of which have been called out for terrible gender and diversity numbers — the venture firms look lousy in this rendering.

As for ethnicity, venture firms don’t score quite as terribly, as long as you’re willing to overlook that the 71 firms employ just four black people who happen to be men. (Given that 12 percent of the American population is African-American, you should not overlook this.)

Says Palihapitiya in his op-ed, “The bottom line is that the VC community is an increasingly predictable and lookalike bunch that just seems to follow each other around from one trivial idea to another.” To “fund the big ideas of our day,” he continues, “we need to improve the decision making — or change the decision makers within our industry.”

For a link to the diversity data collected from VCs; the rankings; and Palihapitiya’s full op-ed, click here.

If you want to complain to Palihapitiya about these findings, which, it should be noted, rank Social + Capital as the most diverse venture firm among those managing more than $1 billion in assets, you can find him here on Twitter.