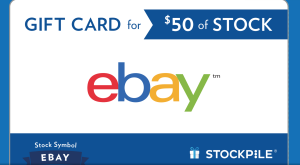 Stockpile, a five-year-old, 15-person, Palo Alto, Ca.-based brokerage services firm has a solution to that problem: Stock gift cards. They say they’ll be everywhere soon, too, thanks in part to $15 million in Series A funding the company has just stockpiled from Sequoia Capital, Mayfield, and actor-investor Ashton Kutcher.

We talked yesterday with Stockpile founder and CEO Avi Lele, along with its chief commercial officer (and former PayPal general manager), Dan Schatt. We asked how the company works, and why traditional brokerages haven’t created gift cards for stock much sooner.

Avi, you previously spent 16 years as a patent attorney. Why start Stockpile?

AL: I’d long thought that rather than buy gifts for my niece and nephew, things they toss to the side after a couple of days, it’d be neat to turn them onto something that would last into the future. So I tried to buy them shares, but it was such a pain that I gave up. You had to open a brokerage account, then get their social security numbers, then fund the account with a couple thousand dollars. And even then, a lot of shares were too expensive. I was like, wait, this is too hard.

You say you then spent four years quietly building a licensed brokerage platform to turn stock into a consumer product. Who are some of your partners?

DS: We’ve got great distribution partners already, including Blackhawk Network, which has 180,000 locations. It’s the company that powers the gift cards you see in racks everywhere from Safeway to Giant Eagle to Toy “R” Us. You’ll be able to buy [our cards] off the shelf at Kmart. They can light up all sorts of chain locations for us.