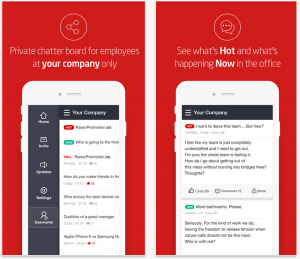 Tired of being monitored by your company while wanting to dish with colleagues about said company? Or maybe you’re curious about what people with similar work experience are making at other companies? Blind, a two-year-old app founded in South Korea and newly available in the U.S., may be just the thing for you.

Its big idea: bringing anonymity to the workplace so you can “share the real you” with other employees. If you happen to figure out what’s really happening in the upper echelons of the company, so much the better.

Blind’s origins trace back to Naver, the South Korean Internet giant, which long ran a widely used employee forum but pulled the plug when employees began making less-than-flattering remarks about management. When a group of Naver employees left to form Blind, many Naver employees embraced the platform, followed by employees elsewhere.

It’s been growing ever since, says Osuke Honda, a general partner at DCM, which led an unannounced Series A round of “single digit millions” in the company in May. Indeed, he says that another pivotal moment for Blind came late last year, when a senior Korean Air executive exploded in a rage after a flight attendant presented her peanuts in a bag instead of on a dish.