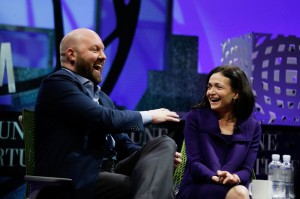 Yesterday morning at Fortune’s Global Forum conference in San Francisco, Fortune interviewer Alan Murray got quite an earful from the guests on his panel: Facebook COO Sheryl Sandberg, and venture capitalist and Facebook board member Marc Andreessen, who pushed back hard on the notion that technology is exacerbating income inequality.

It was a riveting chat that touched on what’s next in mobile, whether Facebook might restructure itself a la Alphabet, and why Andreessen has seemingly been promoting Facebook competitor Twitter by spending so much time publishing to the platform. Some highlights follow.

On the changes brought by mobile. . .

For his part, Andreessen talked at some length about the “smart phone wars,” and the fact that “gigantic manufacturing capacity is being built up worldwide” – from screens to chips to batteries – which has driven down the cost of making smart phones to $25.

That’s great for smartphone customers, of course, but it’s also great for investors, he suggested. The reason: The same components are now used to help produce electric cars, drones, virtual reality hardware and connected toys, among other things. There are “thousands of categories that weren’t possible before that will use smart phone components,” he said.