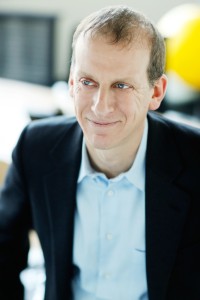 Yesterday, at a conference in San Francisco, we sat down with Rich Miner, a serial entrepreneur who may be best-known for cofounding a company called Android, which was acquired by Google a decade ago and then relegated to the dustbin of history. (Kidding!)

Four-and-a half years later, Miner joined Google Ventures and he continues to work from Cambridge, Ma., making investments on behalf of his new parent company, Alphabet.

We talked with Miner about how that reorganization is impacting Google Ventures, the team’s lack of gender diversity, and why Miner is expecting the stylus to become a bigger part of our lives. More from our chat, edited for length, follows.

To some Google Ventures, remains a bit of an enigma. For example, with offices in Cambridge, the Bay Area and London, do partners invest pretty exclusively in their own backyards?

I live in Boston, so I like to see all the Boston deal flow. But I also sit on the board of several companies in the Bay Area and if it’s something domain specific to mobile and doesn’t happen to be in Boston, I’m certainly going to look at that deal.

What’s happening with the London team? There was a lot of press about it being slow to make investments at first.

Google Ventures is very much not a strategic venture fund. We’re focused on returns. To that point, there was a time where there were investment dollars in Europe but [European startups] trailed behind the U.S. in terms of returns, and we’ve clearly started to see a shift. You now have enough of a history of successful startups, enough capital, and great hotbeds of innovation, including around Berlin, and London and Stockholm, that we think all the right components are in place.

They have separate capital, too, right? The U.S.-based team has $300 million to invest annually and Europe gets its own $125 million annually?

Correct, the European team has the same sort of structure with annual funds and right now, the European fund is a separate fund.
With Alphabet becoming a giant parent above Google, do those budgets change?