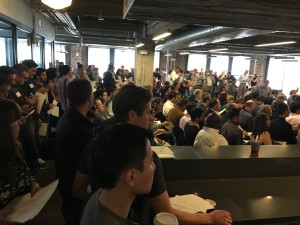 AngelPad, a five-year-old incubator that twice a year chooses roughly a dozen startups to coach over a three-month period, held its ninth “demo day” yesterday in San Francisco. As has become routine, its founders presented to a densely packed audience of invite-only guests.

We weren’t surprised, walking onto the crowded scene. At this point, Angelpad, founded by husband-and-wife team Thomas Korte and Carine Magescas, has earned a solid reputation for finding interesting new entrepreneurs. (MoPub and Crittercism are two of its better-known discoveries.)

The outfit — which provides each company with a $55,000 convertible note and an addition $4,000 per founder in exchange for 7 percent of their startup — also seems to be attracting more sophisticated entrepreneurs. That, or else Korte and Magescas are getting better at identifying talent. As Magescas told us, while companies are “usually just getting off the ground here,” Angelpad’s current batch of 13 companies “has an enormous amount of traction already,” to the tune of $2.5 million in combined revenue. “That’s not intentional,” she says. “Some are just [taking off] earlier than we thought.”

Continue reading for an overview of the presenting companies.