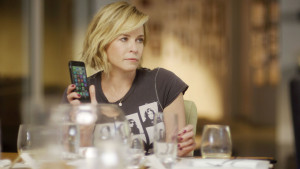 As you may have heard, brash comic Chelsea Handler is set to host a new series on Netflix entitled “Chelsea Does…” in which she’ll explore a range of issues, including a universe still foreign to many outside of it: Silicon Valley.

Now, as the series debut approaches on Saturday, January 23rd, at least one venture firm –- Foundation Capital — is waiting on pins and needles. The reason? Foundation somewhat bravely agreed to let Handler and crew into their offices so she could pitch them on an mobile app while the show was being filmed.

On Friday, we talked with general partner Paul Holland and Foundation’s marketing partner, Meg Sloan, about what went down.

How did it come to pass that you’re in this new show?

MS: [Foundation entrepreneur-in-residence] RJ Jain was working with [Handler’s] development team on her app. We’re also early investors in Netflix, so I think we were on the radar of the production team.

I used to work at Facebook, where we have posters that say: “What would you do if you weren’t afraid?” I joked [to the team here] that the answer was to say yes to being in a Chelsea Handler documentary.

What was the idea exactly?

MS: That she would pitch us her app. We also talked with the producers, who asked for our help with some locations, and we put together a happy hour for Chelsea in Palo Alto with a cross section of folks we know. I think she was super interested in the social scene here in Silicon Valley, to the degree that there is any. [Laughs.]

Was the pitch straightforward?

PH: She came in with an entourage – not her entourage from [her long-running E! Online show, “Chelsea Lately”], but she’d encountered a young kid along the way, a 10-year-old, Silicon Valley kid who has [his own] app and she was fascinated by him. She also brought her dog, Chunk.