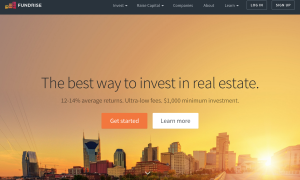 Yesterday, The Real Deal, an outlet that covers New York real estate news, turned up an SEC filing which states that Fundrise has fired its mortgage REIT’s chief financial officer and treasurer Michael McCord, citing an attempt by McCord to extort more than $1 million from the company.

“Exhibit one” listed in the filing is a letter to Fundrise’s backers that reads: “Strategic Investors & Advisors, I am saddened to have to inform you that an employee of our company has engaged in what we believe to be an attempt to extort over $1M from the company. As part of this, he claims the company acted inappropriately concerning two real estate deals. Though we believe there is no merit to his claims, we take any allegation with the utmost seriousness.

As a result, we have engaged a third-party financial audit firm to conduct a thorough investigation concerning his allegations. We are pursuing all appropriate and precautionary steps to protect our investors and our organization.

Furthermore, we are contacting the appropriate law enforcement agency to report what we believe to be his criminal behavior.”

The letter was presumably authored by Fundrise cofounder and CEO Benjamin Miller, who, according to the same SEC filing, is taking on the role of interim CFO and treasurer in addition to his other responsibilities.

Miller did not respond to requests for comment today.

Several investors didn’t respond to requests for comment; another called the development “concerning,” and said his team would be “tracking it more closely.”

Asked about the accusation, McCord told us last night that the “current narrative” is “baseless and a pathetic deflection attempt from the real story by Fundrise.” He declined to comment further.