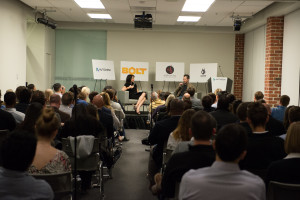 Thursday night, at a StrictlyVC event in San Francisco, we talked with GV CEO Bill Maris about a wide range of issues, including what happened with its Europe fund, why GV didn’t invest in Zenefits, and why Maris alone makes every decision on behalf of the powerful venture unit, which now employs 70 people.

As venture geeks, we found much of what he had to say interesting. Hopefully, you’ll find the conversation instructive, too. (It’s been edited lightly for length.)

You work for the most valuable company in the world. You run its venture arm. Every decision falls to you and you alone, which not everyone realizes.

What is the trickle-up process?

So all the investment decisions I make, going into a company or when and how to come out of it, is in collaboration with the partner who brings [the deal] forward. So we talk about all the opportunities as a team and everyone is invited to that discussion – not just the investing partners. And we don’t take a vote. It’s not like a democracy in any way. But everyone knows where people stand and we try and give each other good advice, and at the end of the day, the person who brings it forward and I decide whether to move forward or not.

Why isn’t it more democratic?

I have no idea, because I’ve never worked as a venture capitalist before. I masquerade as one now . .  . But basically it started out with just me. The buck stops with me. So if we succeed, credit all goes to the team. If we fail, the blame should fall all on me; that’s how management should work.

Do Larry Page or Sergey Brin ever say, “Bill, why’d you invest in XYZ deal?”

They never say anything. And that’s not a bad thing. We designed it specifically not to be influenced by Google. Larry and Sergey . . . are billionaires. Google has many billions of dollars. If they want to invest in something themselves, they have the opportunity to do that.

Some people are surprised that they don’t or can’t influence [GV], but the idea was that they wouldn’t. So I never talk about ventures with them. The closest we get is an email from Larry with a URL of a company that he came across.