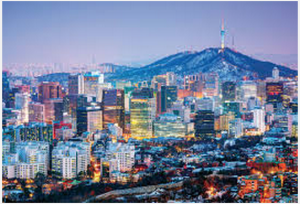 Korea is sizzling, and the fact isn’t lost on Altos Ventures or its backers. The early-stage venture firm, with an office on Sand Hill Road and in Seoul, has just raised an oversubscribed $110 million fund to invest exclusively in the country, the second fund of its type for Altos, which raised its last Korea-focused fund with $60 million in 2013. (The firm has also raised four U.S.-focused funds over the last decade.)

It’s easy to understand LPs’ enthusiasm. Korea boasts the world’s 12th economy, with more than 50 million inhabitants and GDP per capita of roughly $25,000, according to the World Bank. Its inhabitants are entrepreneurial, with 28 percent of the population self-employed versus 10 percent in the U.S. Korea also has among the world’s fastest and mostly broadly deployed broadband.

Also very notably, Korea has produced more than a dozen Internet companies worth more than a billion dollars over the last decade or so, including the web search giant Naver, a now publicly traded company valued at $17 billion; the web search company Daum Kakao, formed when Korean internet firm Daum merged with domestic messaging app company Kakao in a $2.9 billion deal in 2014 (it’s now valued at $5.5 billion); and Yello Mobile, whose mobile apps business was valued at $4 billion during its most recent funding round in December.

Yesterday, we talked with Altos Ventures managing director Anthony Lee to get a better picture of what’s going on, and how his firm is going to invest its new fund.

When and why did you start investing in Korea?

About 10 years ago. We started seeing this opportunity that was very much overlooked in many ways. Everyone knows the country for LG and Samsung, but there are now a lot of very real, billion dollars companies, and there’s almost zero Western capital in those companies. Many bootstrapped themselves. They were almost entirely missed by VCs in Silicon Valley.

That must be changing. What other investors are you starting to see who you didn’t see five years ago?

There’s a much stronger focus on profitability in Korea than in the U.S., is that right?

Yes. Korean venture has been more merchant banking and corporate in its nature, meaning it invests for very quick returns. The government is a large LP in many funds and they’ve [accordingly been] optimized for lower risk. We sometimes find ourselves pushing companies in the direction of growth and not profitability. At the same time, of the 30 companies we’ve invested in there, we’ve only had one loss. It’s a bit emblematic of the way Korean entrepreneurs work. They hate to fail.