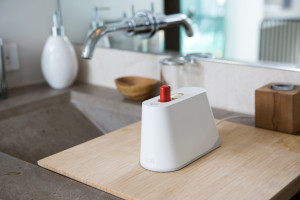 Messerschmidt also knew when he left Apple to found a new company that it would again involve smartphones. After all, he reasoned, they’re starting to help us track not just our general wellness but also our responses to medicine and other treatments. The bigger question was which chronic condition he would tackle and before long, he settled on Cor, a now two-year-old, San Francisco-based, consumer-facing startup that helps measure heart health, all with just a tiny drop of blood.

Before you start worrying that Cor is a young Theranos, the embattled blood testing company, it’s worth noting that there are many meaningful differences between the two companies. For one thing, Cor wants people to test themselves in their own homes, using an appliance the size of an electric toothbrush and disposable cartridges. Their blood chemistry information is then sent “into the cloud,” analyzed, and results are beamed backed to users within five minutes, along with helpful tips about how to improve them.

It’s trying to be as transparent as possible about how, too.