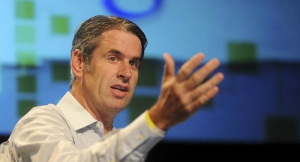 On Monday, the National Venture Capital Association and Thomson Reuters released some surprising data. Despite few opportunities to exit from their investments, 57 venture firms managed to raise $12 billion in the first quarter — more money than VCs have raised since the second quarter of 2006. More, just seven firms counted for nearly two-thirds of all that money, with four raising north of a billion dollars apiece.

“It’s not just the size of the funds but the velocity” at which VCs are returning to their investors, known as limited partners (or LPs), says an astonished Bill Gurley of the venture firm Benchmark. “The Kauffman fund said that billion dollar funds sucked, then everybody went out and raised billion-dollar funds.”

Gurley is referring to a 2012 Kauffman Foundation report that suggests venture capital isn’t a great place for institutions to invest, and that big venture funds are a losing proposition almost entirely.

According to the organization’s findings, which it based on its 20-plus years of investing in more than 100 venture funds, only 20 percent of its investments had generated returns that beat a public market equivalent as of 2012, and even then, the funds outpaced those public market indices by a measly three percent. Kauffman further found that only four of 30 venture funds that exceeded $400 million delivered better returns for investors than a small-cap common stock index.

What’s changed in four years’ time? As far as Gurley is concerned, not a thing. Gurley — whose firm raised one billion-dollar fund in the late ’90s and quickly reverted back to sub $500 million funds — says he doesn’t think big venture funds add up for anyone other than VCs, whose management fees typically equal two percent of a fund. “If you talk with an LP, you’ll hear that funds raised in times of scarcity perform the best, while those raised in peak [fundraising] moments don’t have the best returns. The only type of return that’s guaranteed is excessive fee income. You get that no matter what, which is a conflict, for sure.”