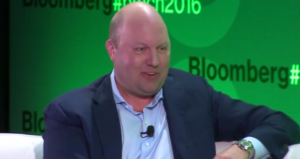 Venture capitalist Marc Andreessen spoke at the Bloomberg Technology conference yesterday afternoon, and he said he expects far more M&A than the tech industry has seen in recent years.

The conversation stemmed in large part from questions about LinkedIn’s announced acquisition by Microsoft, which disclosed Monday that it is paying$26.2 billion in cash for the business networking platform.

Asked his opinion about the deal, Andreessen — who was interrupted by the clang of a falling tray (“I hope that was not a symbolic sound effect,” he joked) — said the deal “eliminates the guesswork about how much [a company is] worth when someone pays $26 billion in cash ” for it.

But he also said that, on a higher level, it conveys something about the industry right now. “We see more M&A happening in the pipeline – meaning companies in consideration or negotiation — than in the last four years.”

There are a few reasons for it, he suggested, saying that in recent years, a lot of “public companies sat back and watched the drama play out in the Valley . . . and the constant drumbeat of ‘bubble, bubble, bubble.’” Now, with many private company valuations down from their peaks last year, along with public companies that “now have to go shopping to fill in gaps in their portfolio,” Andreessen said to expect a “run of M&A the rest of this year and next year.”

The buyers won’t necessarily be Facebook, Microsoft, and Google, he noted. “A lot more nontraditional buyers — Fortune 500 companies outside [of tech are] going shopping, [including] the car industry, other consumer products companies, clothing companies.” (Andreessen didn’t say so, but private equity firms also plainly see an opportunity to do some shopping right now.)

In fact, Andreessen’s firm, Andreessen Horowitz, is trying to prep its portfolio companies for an exit by establishing what he described as an IPO preparedness team that’s working with founders on what’s required to go public, from accounting and legal, to building a governance team, to selecting the right CFO.